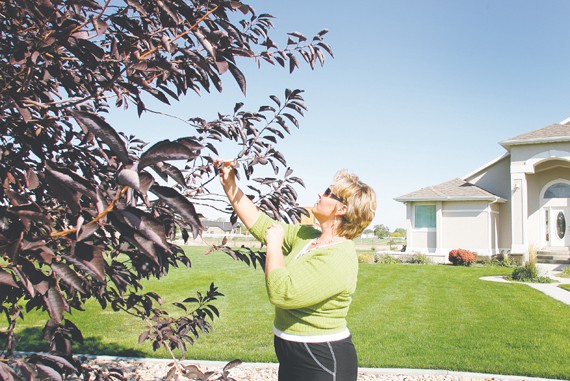 Jodi Sandberg looks at one of the Canada red trees that she planted in front of her Grantsville home five years ago when the Grantsville tree program began. The Grantsville Beautification and Shade Tree Commission holds a tree sale twice a year in an effort to bring trees back to the city.

For years, Grantsville was one of the leafiest towns in Utah. Towering old poplars, willows and ash trees lined the streets, thriving off water flowing in irrigation ditches along the roads. But then, in the 1980s, a pressurized pipe system was installed and the ditches dried up, meaning the end for trees that had stood for decades. Gigantic stumps — the tombstones of Grantsville’s green past — remain scattered along the oldest streets today.

Over the past five years, however, city officials have been engaged in an ambitious program to restore Grantsville’s arboreal reputation through twice-annual tree sales funded by the city.

“Our goal is to bring back the beauty of Grantsville’s past,” said Gary Fawson, a member of the city’s Shade Tree Commission and coordinator for the tree sales.

Fawson said the program began five years ago when Mayor Byron Anderson asked for his help in getting Grantsville certified as a Tree City USA — a designation given by the Arbor Day Foundation, in cooperation with the USDA Forest Service and the National Association of State Foresters, to cities that meet certain criteria. Those criteria include: at least $2 per capita spent on a tree program; a city tree board; a city tree ordinance, which provides guidance for planting and maintenance; and an Arbor Day celebration.

Fawson said it took about a year to earn the designation, which the city must requalify for each year.

The tree sale is held each April and October. The trees cost $75 each, but if homeowners will plant two trees in the park strip along the street, Grantsville City will pay half the purchase price. If homeowners purchase just one tree for the park strip, the city will also pay for half. Homeowners can also purchase additional trees at full price for use anywhere else in their yard. The trees are an inch-and-a-half caliper in size, and are supplied at a discount by Tri City Nursery in Kaysville, according to Fawson.

The trees that are offered were selected because they grow well in Grantsville. The trees available this year include fruitless mulberry, London plane, hackberry, green ash, honeylocust, linden, ornamental pear, crab apple and Canada red.

In the past five years, the program has seen more than 1,000 trees planted, according to Fawson.

Jodi Sandberg planted five Canada reds in the area between her yard and the street about five years ago through the program. “I think the program is great, especially out here where it’s so desolate,” she said. “It’s so nice because they allow you to buy them at a discounted rate, and they’re not junk trees. They’re trees that grow well here.”

Residents wanting to purchase trees as part of the program need to have order forms returned to Grantsville City Hall by 5 p.m. Friday, Oct. 3. The trees can be picked up one week later from noon to 5 p.m. Fawson said once the trees are planted, it’s important residents water them as needed so they don’t die. Often, he said when people ask for his help in diagnosing what’s wrong with a tree, he finds that it is suffering due to lack of water.