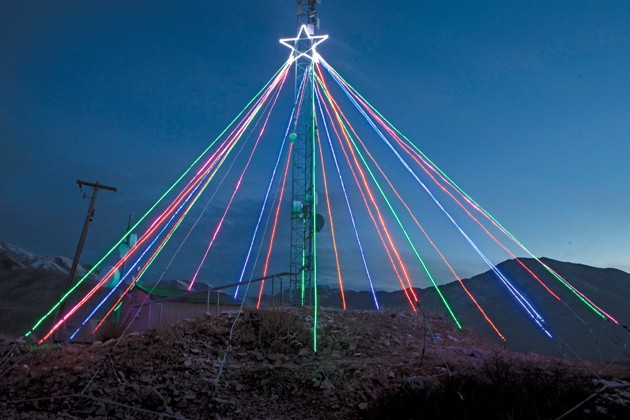 The lighted tree atop Little Mountain has been a Tooele holiday tradition for many years. A group of citizens and businesses have worked together to place a flag where the Christmas tree usually stands on Saturday to remember 9/11.

A 10-foot by 15-foot U.S. flag will rise on top of Little Mountain on Saturday to commemorate the 20th anniversary of 9/11.

A group of county residents and businesses have worked together to put a 65-foot flag pole with a large U.S. flag on top of Little Mountain where Tooele County Search and Rescue lights their traditional Christmas tree during the holiday season.

The flag will rise between 9 and 10 .a.m., according to Colleen Johnson.

The exact time will be posted on the Tooele 411 Facebook page, Johnson said.

“We don’t have enough room on top of Little Mountain to invite the public to come up and watch,” said Johnson. “But it’s big enough that most people will be able to see it go up from their home.”

The flag will be lit so it can be left up at night, she said.

There are many memorial events planned for 9/11.

At 6:46 a.m. the Tooele County alarm system will sound. At that time many cities, towns, and communities throughout the County will hold their own flag raising ceremonies and a moment of silence.

A countywide memorial event will be held at the Utah Motorsports Park on Saturday, starting at 6 p.m. with a First Responder Safety Fair, a program at 8 p.m. and fireworks at 9 p.m.