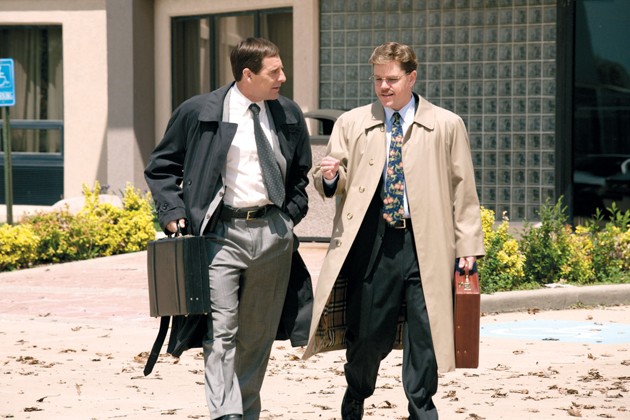 Sometimes, it’s the little things in a movie that make it fun. The story may be OK, the actors good and the direction decent, but those minute details — even if they don’t really matter — can make or break a movie. Take “The Informant!” for instance, where if it wasn’t for the subtext voiceover of Matt Damon’s character Mark Whitacre, the film would have been a complete snoozefest. Because these thoughts that range from polar bears to tie stripes are revealed, it makes a typically unfunny movie more palatable.

Based on the true events of a biochemist-turned-executive who snitches on his own company, “The Informant!” is similar to last year’s “Burn After Reading” — a lot of stuff happens in the movie, but we don’t really know why. If it wasn’t for the film’s factual basis, it probably wouldn’t be as intriguing and would fall under the category of another Damon/ Steven Soderbergh team-up. (Soderbergh previously directed Damon in the “Ocean’s” trilogy. Both movies have a similar feel.)

What makes “The Informant!” good, but not great, is Damon’s performance. He’s lovable at first and as the film wears on the audience realizes who he really is — a tattletale. As most know, a tattletale will eventually get what’s coming to him. I generally enjoy watching Damon because rarely does he fall prey to playing himself — unlike many mainstream Hollywood actors.

The supporting performances from Scott Bakula as an FBI agent working with Whitacre to gather information and Melanie Lynskey as Whitacre’s wife are particularly good. While they do shine on screen, they also don’t take away from Damon’s character, which is the focus of “The Informant!” Likewise, small roles played by Thomas F. Wilson, Scott Adsit and Ann Cusack keep audiences on their toes because of all the wellknown — or at least familiar looking — actors who pop up.

“The Informant!” begins in 1992 Illinois where Mark Whitacre is fast becoming a highly paid executive with Archer Daniels Midland (ADM), a company that transforms crops into food, feed, fuel and chemicals. Starting out as a biochemist with a Ph.D., he moves up the chain quickly. Then, for some unknown reason, Whitacre confesses to FBI agent Brian Shepard (Bakula) that ADM officials met with competitors to price-fix the food additive lysine. The FBI agents, surprised by someone who sat in on the meetings divulging this information, use Whitacre to gather information about the price-fixing to build their case.

Whitacre works as a pseudo double agent for three years and travels to Tokyo, Mexico City and Paris to record hundreds of hours of video and audio tapes hoping that any of the information gathered could be used against ADM. Although Agent Shepard considers Whitacre to be an excellent informant, going above and beyond since he’s not an FBI agent, curiosity remains as to why Whitacre goes through the hassle of helping them. In a sudden turn of events, Whitacre reveals that all talks of price-fixing have ceased, leaving the FBI without a solid case.

However, Whitacre was actually trying to cover his own tracks because he stole $9 million (or a figure around that amount since he told different people different amounts) from ADM while working for the FBI. During the past three years Whitacre became delusional with his own agenda and his poor judgment led to the violation of his immunity agreement with the FBI where he was charged with price-fixing — the same case where he exposed the company — in addition to wire fraud, tax fraud and money laundering. In the end, Whitacre’s pathological lying schemes cause him to wind up in jail while being deemed as one of the greatest informants.

“The Informant!” is probably more humorous than it should be considering the seriousness of the crimes committed. However, a movie about a guy tattling on a company that deals with corn and wheat in Illinois would otherwise be a bore.