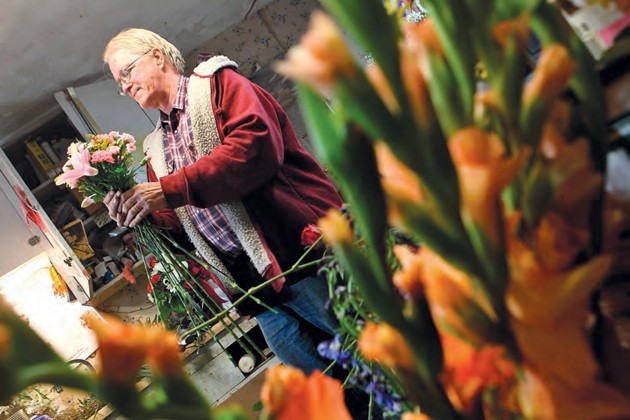 Local florists are hoping their business blooms anew this Valentine’s Day after several years of unromantic receipts due to the faltering economy.

“We’ve definitely seen a cutback on people sending flowers. It’s been pretty painful,” said Pam Acosta, owner of Creative Edge Design and Decor in Tooele. “I’m hoping for an improvement this year. I can say last year was not an improvement over the year before.”

Acosta is optimistic partly because Valentine’s Day falls on a Tuesday this year. She said whatever day of the week the holiday lands on can impact sales. Men are more likely to order flowers for their significant others when the holiday falls on a weekday, because having them sent to the person’s workplace provides more bang for their buck than giving them on a weekend.

“For flower shops, the purchasers are mostly men. If they can send them to their wife or girlfriend at work, the wife or girlfriend’s response is better,” Acosta said. “And if it’s on a weekend, they don’t get that same response.”

Kass Black, a florist at Albertsons, hopes for an upswing in sales as well this year. The company is hoping for a 10 percent increase over last year. Black said she will sell around 10,000 flowers for Valentine’s Day, and roses, though more expensive at this time of year, are her biggest seller. Potted, plantable items are also popular, she said.

Black said the economy is not the only factor that can determine flower sales.

“One year was really bad because we got 14 inches of snow,” she said. “Sometimes the weather can affect sales.”

However, some florists feel that love — and Valentine’s Day — are recession-proof.

Joel Sagers, owner of Tooele Floral, said sales in 2009 dipped but have since been climbing back up to pre-recession levels. Nan Christensen, a florist with both Soelberg’s Market locations, said she has not found that the recession has played a big role in sales of flowers for Valentine’s Day over the last few years, possibly because of the novelty of the holiday.

“It hasn’t actually been as bad as what we thought it would be. People still need a smile, to be cheered up,” she said.

Whatever the sales outlook, florists are staying busy putting in extra hours preparing arrangements and flowers for last-minute orders. Acosta said people often call late into the day on Valentine’s Day hoping it is not too late to still purchase flowers. What is “too late” depends on how busy the employees are, more than the flower supply or the hour of the day, she said.

However busy it is on Valentine’s, though, Christensen said, it is impossible to tell how successful the holiday was until it’s over.

“Until the doors are closed Tuesday night, we won’t know,” she said.