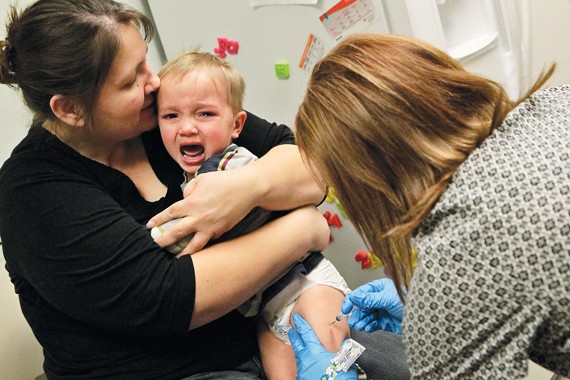 Emily Julian holds on to 2-year-old Justin Julian as he gets his flu shot from nurse Kendra Muir Tuesday morning at the Tooele County Health Department. Health officials credit the vaccination drive as the reason for the low number of flu cases this season.

Local health professionals are crediting a vaccination drive as the main reason why Tooele County has seen a mild flu season two years in a row.

Sherrie Ahlstrom, family and school health supervisor for the Tooele County Health Department, said across the state flu-like illnesses are at a low to moderate level. In Tooele County, they are at a minimal level. These levels are measured by the amount of people who have fevers that are 100 degrees Fahrenheit or higher and have a cough or sore throat. Once about 25 people have been hospitalized for the flu in an area, the level will move from minimal to low to moderate.

“We’ve seen in the last couple of weeks a rise in the number of illnesses in Utah, but that’s typical for this time of year,” Ahlstrom said. “In Tooele County, this is the time of the year when we usually see an increase, but so far the illness has been minimal. Last year was also a really mild year. We’re right about the same at this point of the year compared to last year at this time.”

Ahlstrom said the health department has given a total of about 7,000 flu vaccinations so far this year.

“That’s about 500 more than last year for the whole year,” Ahlstrom said. “We can attribute some of that increase to our school clinics.”

Ronald Trudel specializes in internal medicine and geriatrics at the Mountain West Medical Center-affiliated Mountain View Health Care in Tooele. Trudel, who is also a hospitalist — a doctor whose primary focus is care of patients in the hospital setting — for MWMC, agreed that this year’s flu season has been very mild so far.

“So far, so good. We have not diagnosed any cases of flu, but we’ve tested many patients who have had symptoms and haven’t received their flu shot,” he said. “They’ve all been negative when we test for influenza.”

Trudel said this trend can be attributed to county entities joining forces to promote getting vaccinated.

“One of the big things is the fact that we’ve been on top of having patients get the vaccine, whether it’s through their doctor’s office, local pharmacies or the health department,” he said.

Trudel said although flu season typically begins in October and ends in March, its seriousness can depend on how bad of a winter the area suffers.

“The reason we have the flu spreading in the winter is because more people are congregated indoors than in the spring, summer and fall,” he said. “So far, so good, but we’re really coming up to the peak over the next couple of months.”

Even though flu season is well underway, Ahlstrom said it’s not too late for people to get vaccinated.

“We’re still trying to get the word out to vaccinate everyone,” she said. “We still have plenty of vaccine left and it’s still early enough to get vaccinated. We encourage everyone to get in and do it, especially with the holidays coming up. It’s a good idea to get in and get the shot.”

In addition to getting vaccinated, Ahlstrom said people need to remember good health etiquette. When they’re around large groups, people should be covering their mouths when coughing, practicing good hand washing and staying home when they’re sick, she said.

“Prevention has really helped and has caught on,” Trudel said. “There are a lot of individuals who have had the flu and don’t want to get it again. They know why it’s bad, having gone through it.”

Trudel said this year’s flu might also be milder because there isn’t a huge change in the flu strain.

Trudel said individuals who received a shot last year that included H1N1 vaccine should still have some of that vaccine in their system. People who also received a flu shot this year are getting more protection against the flu because the flu strain hasn’t changed much from last year to this year, he said.

“Some patients come down with the flu after getting their shot, and they think it’s because they got the shot, but that’s impossible,” Trudel said. “With the shots we give, it’s a dead virus. Instead, what happens is someone is in communication with someone who has the flu and they get infected with the virus. They then have an incubation period where the virus multiplies, and if during that incubation period they get the shot, they can still get the flu because they were already harboring the virus. The vaccine is not effective right away.”

Overall, Trudel said the flu is the No. 1 health concern among doctors during the winter months because it is so contagious.

“Flu is the biggest concern from a communicable disease standpoint in the winter,” Trudel said. “It’s contagious and people are indoors more, which will promote the transmission of the particles that are harboring the virus. It’s important to get vaccinated and keep the flu from spreading by coughing into your elbow, washing your hands and staying home when you’re sick.”