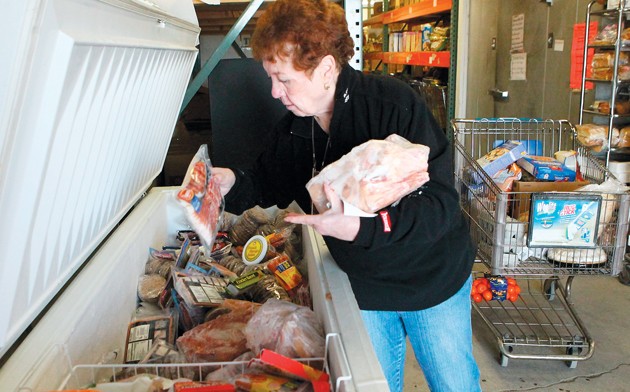 The last nine months have been a tumultuous ride for the Tooele County Food Bank, but the service continues to help residents from its location on Tooele City’s Main Street.

The rough start began in July 2012 when an effort to expand the Community Resource Center, the home of the food bank and Tooele County Relief Services, was met with opposition from Tooele City officials and downtown merchants. Tooele County received approval for a $402,900 community development block grant to purchase the former Sweat Fitness building, north and adjacent to the Community Resource Center.

The plan was to take care of burgeoning needs of both social service agencies by connecting the buildings. Relief Services would move into the new space and leave room in the current building for additional food storage and client services for the food bank.

City officials and merchants opposed the move because it would displace a current business, and the expansion of county social services did not fit their vision for downtown economic revival.

The county then turned its eye to the former Al and Lid’s Furniture store behind the Kirk Hotel. However, the city objected to the new location because it was still in the downtown area.

Reopening of the county budget two months ago caused discussion of the resource center’s expansion to be tabled as county commissioners looked for ways to cut spending in all departments.

The tumult continued as the budget crisis triggered rumors that the food bank may be transferred to another organization, possibly a new non-profit group.

And then last week federal sequestrations were blamed for the closure of a food bank in Murray.

But the Tooele County Food Bank’s director is resolute that the shelves of food for citizens in need are here to stay.

“Right now it looks like we will stay put right where we are and continue to serve the people of Tooele County,” said Director Lori Trujillo.

Federal sequestrations, at least so far, have not affected the food bank’s federal grants, which along with state grants, pay for most of Trujillo and two part-time workers’ wages.

Unless there are documented special needs, most families are limited to receive help from the food bank once every two months. Seniors and people with disabilities can draw a food order once a month, said Trujillo.

In March 2013, the food bank served 437 families. That number is about the same as March of last year, according to Trujillo.

However, this may be just the calm before the storm.

“We have been warned that the closure of Deseret Chemical Depot, and the furloughs of federal workers, may create an increase in people that need our help,” she said.

Trujillo, who has managed the local food bank since it opened in 1991, said experience has taught her that the Tooele community will respond with donations to take care of people in need.

Right now the food bank’s shelves are full thanks to 32,365 pounds of food collected on March 23 by local Scouts during their annual Scouting for Food drive.

The Salt Lake CAP started the Tooele food bank in 1991.

In November 2007, the food bank moved from the corner of Second and Maple streets, where it had been located for 10 years, to its current location in the former JCPenney Building at 38 S. Main Street after the county purchased the building in September 2007.

The county take over to provide more local control, said county officials in 2009.

“I expect we will be here as long as there is a need for our services in Tooele County,” said Trujillo.