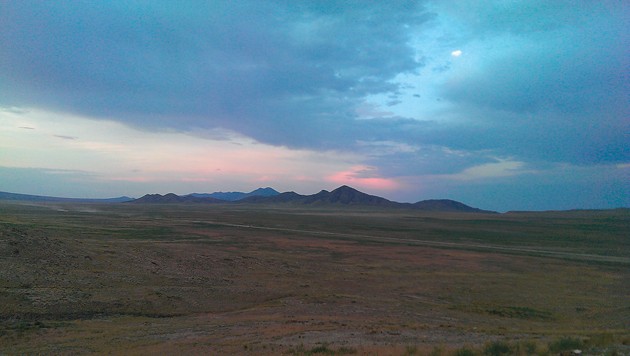 The West Desert provides a perfect place to camp and enjoy the night sky.

July 18, 2013
For a unique experience, spend a campfire-less night in the desert

I decided to spend the evening on the desert the other night and when I do, I often go to a little hill just a ways outside the Dugway Proving Ground Garrison gate. I call the place “Fly a Kite Hill,” on account that we used to go there to fly kites when we lived on the installation.

To get there you follow state Route 199 over Johnson’s Pass and then just before the Dugway Proving Ground Main Gate, you take a left just past the church and follow that road south for less than a mile to where a road breaks off to the east on the left hand side and climbs up a hill.

Once you top out on the low crest another trail breaks off to the right and south up to the top of a small prominence that  rises from the valley floor. This is the hill. I have camped on it in the back of my truck many times, and I have observed the desert in all seasons from there. It is enjoyable to open the tailgate and back window and sit there and gaze at the desert all night. There is a small flat near the top of the hill that provides a commanding lookout to the south. Round Top of Davis Mountain is in the foreground, and the Simpson Range rises higher still beyond that.

One time while I camped there, the moon was full and it lit the desert to an unbelievable degree. I sat in my chair and looked at landscape and sky, awestruck as the desert has its own magical qualities at night. On another occasion, I watched intermittent flashes of lightning in the dark sky as far off thunder squalls marched across the desert. During storms like that, it is too dark to see the mountains but when the lightning flashes, it outlines the land features perfectly if only for a second. On another occasion, I was there during a storm that was so fierce, I thought the shell of my truck was going to be ripped off of the frame.

The other night when I crested the low rise of the hill around 10:30 p.m. I found myself unexpectedly in the middle of a herd of about 75 wild mustangs. I immediately stopped my vehicle, shut it down and turned off the lights. I thankfully avoided alarming and scattering them, and quietly rolled down the windows.

The horses were beautiful, strong, proud, defiant and healthy looking. In a word they were Wild. I listened to their snorting, whining and stomping that shattered the otherwise silent desert night. The horses eventually ran off, and as they did, their hundreds of hooves striking the dirt and rocks sounded like someone churning cement mix in a wheel barrow. After that, I drove to my usual spot at the flat near the top of the knoll.

It was a warm 79 degrees, but an occasional blast of cool-to-cold air would mix in from time to time. It was mostly silent. All I could hear were the voices of the far off horses as they bayed and whined out in the darkness. I unfolded my camp chair next to my truck and sat down to observe. As usual, I picked out the Big Dipper with relative ease and then the “W” shape of Cassiopeia. I noticed a pair of headlights far off on the desert, perhaps a dozen miles away. They bounced and tossed this way and that, and then they were gone to who knows where and it was dark again. Other than the illumination of the horizon above the Onaqui Range to the east, which is caused by Tooele Army Depot South Area, it was really darn dark out there.

A pretty decent wind began to pick up out of the south and normally I would welcome a breeze after a hot day. But when you are alone on the desert it is difficult to hear if someone or something is creeping up on you. This makes the wind quite annoying. Therefore, I always have my trusty USMC K Bar knife on me. It usually makes me feel a little better as I begin to doze off.

Fly a Kite Hill is just one of a countless number of places in the West Desert that make a perfect place to enjoy the desert of an evening. No need to build a fire; just shut off your rig, turn off the lights and enjoy the show. In the summertime, you need to be mindful that once the sun goes down, the creepy crawlies come out such as snakes, tarantulas, scorpions etc., so be careful where you walk and set. Otherwise, the almost smoky streak of the Milky Way Galaxy above, with its billions and billions of stars, is an incredible thing to see away from the city lights. Out there your imagination really is the only limit.