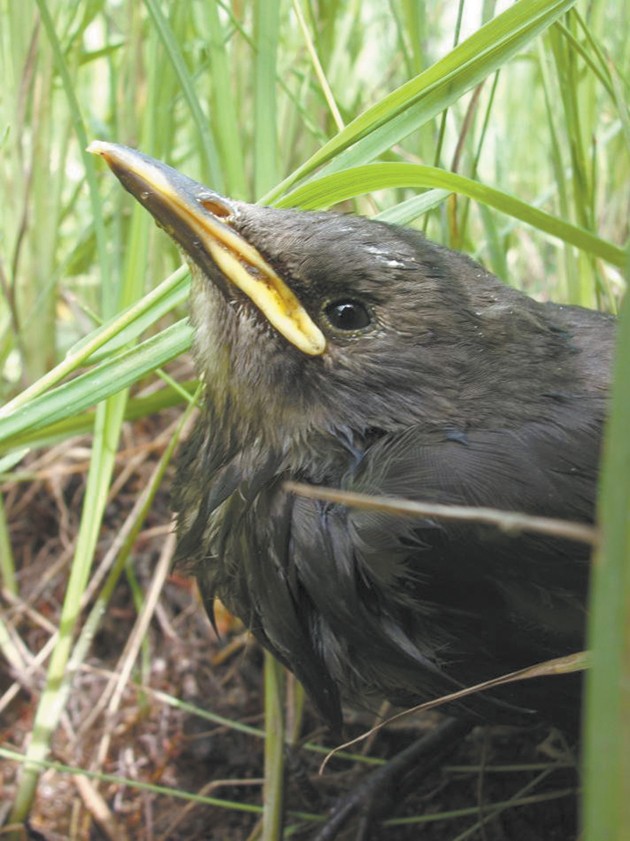 A European Starling hides in the grass of a Tooele County park. Though this young fledgling was left alone and only photographed, it loudly wailed for its nearby parents when approached.

In the late 1800’s, Eugene Schieffelin, an admirer of Shakespeare and the head of the American Acclimatization Society organization, wanted to introduce all the kinds of birds mentioned in Shakespeare’s plays to North America. The European starling, among one of the introduced species, were released in 1890-91 in Central Park, New York City. Even though only 100 starlings were released that day, they have rapidly evolved to an estimate of over 200 million on our continent today.

The European starling’s reproductive cycle is quite simple. During the spring and summer seasons, males purposely lure females by building nests in their preferred sites. They make them eye-catching judging by the location.

Varying from 10-60 feet above the ground, males usually construct nests inside the cavities of buildings, streetlights, wood pecker holes, burrows, bird boxes, or even on other bird’s nests. After mating takes place, females lay an estimated 4-5 eggs, and will take turns with the male incubating them.

Hatching after 13 days of incubation, nestlings are provided with good care and an endless supply of food. In fact, these birds are not picky and can likely eat anything in the form of fruit, grains, seeds, food waste, nectar and insects.

After three weeks, juveniles leave the nest, but will hang around their parents for two more weeks to beg for food. Eventually after the fledglings leave to tend for themselves, starling couples will have 1-2 more clutches for the season.

After choosing nests, female starlings will replace or discard items that don’t suit their nesting preferences.

Starlings are daring, brave, and aggressive when raising their young. Starlings have been seen to chase and dive-bomb predatory birds, such as falcons and hawks.

Addie T. Lindsay is 17 years old. She is an accomplished writer and photographer of wildlife creatures, big and small. She can be reached at CritterChatter@Live.com.