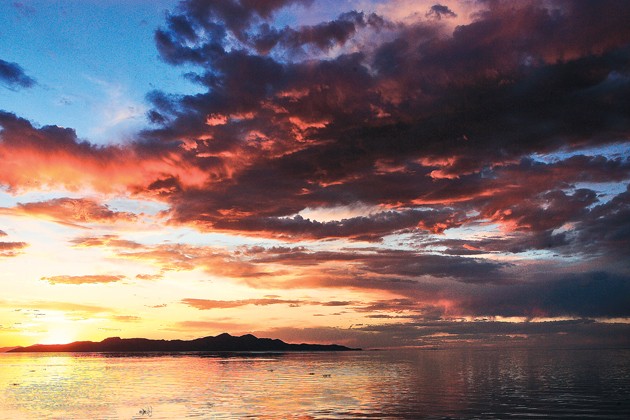 The Bonneville Salt Flats are hailed as being “the” place in Tooele County to see the curvature of the Earth. But the Great Salt Lake’s often calm surface reveals it as well — thanks to clouds.

December 10, 2015
Forget the salt flats. The Great Salt Lake has ‘The Curve’ too

Tooele County has more than a dozen mountain ranges, several with summits that crack 10,000 feet above sea level. Yet, the county is perhaps more renowned for land features that go out instead of up.

Look out from the lake’s southern shoreline, and except for Stansbury and Antelope islands, the water appears flat as slate to the horizon. But on a cold, clear morning in October, I unexpectedly discovered the lake is not so horizontal after all.

My discovery occurred while driving toward and down the SR-201 off-ramp to westbound Interstate 80 at Black Rock. I quickly looked across the lake while navigating the ramp’s gradual left turn. The water’s surface was dead calm, and the sky was cloudless — except on the northern horizon.

There, I could see a long band of white and gray cumulus clouds flying in a straight line from west to east. I admired their unique shapes, born of rising air and condensed water vapor. Although they were probably 100 or more miles away, I tried to guess the height of their bases. As a soaring pilot who uses such clouds to stay aloft, calculating cloud bases from the ground is one of many weird things that I do. But the bottoms of the clouds weren’t visible. I thought that to be odd, and turned my attention back to driving.

After merging into traffic on westbound I-80, I glanced again and again across the lake to the clouds. Their bases definitely weren’t visible — and not because of haze, pollution or distorted light. My skin began to tingle. Was it possible I was witnessing the curvature of Earth’s surface so simply and accidentally?

When I first started to work for the Tooele Transcript Bulletin in 1983, I soon learned about the origins of the Bonneville Salt Flats. I also learned about their famous land speed racing history that began in 1914, and all the movies and commercials that have been shot there. But another factoid about the salt flats caught my attention more: Somebody figured out the Earth’s curvature can be seen there.

I’ve been to the salt flats dozens of times over the past three decades. Every time I’ve stood on that stark, yet magnificent white plain of salt, I’d squint into the distance at Floating Island or the Grassy Mountains, hoping to see “The Curve.” But due to haze or heat mirage, visual conditions were never ideal for me to see it and say, “There it is.”

But on that October morning a few weeks ago, there was no haze or heat mirage. The air over the Great Salt Lake was pristine and visibility was endless. And with a band of cumulus clouds flying parallel to the horizon over the lake, conditions were just right for a certain mathematical theorem to prove to me the Earth is, in fact, round.

I’m a hopeless math dummy that can barely reconcile a checkbook, but I do know that mathematicians use the Pythagorean theorem to show the curvature of Earth’s surface is approximately eight inches per mile. With all its other mysterious calculations born of Greek minds, the theorem also further explains as to why that October morning’s cloud bases, probably a few thousand feet above the ground, were so well hidden below the horizon.

Realizing what I had just witnessed, I felt like a sailor at sea hundreds of years ago who for the first time experienced watching an approaching sailing ship gradually appear over the horizon: First the crow’s nest, then the sails and mast, and then finally, the hull.

We live on a blue planet of rock, water and air, whose shape resembles a big, happy beach ball bobbing through space. I’m definitely not a Flat Earth Society member, but it’s finally good to see with my own eyes that our Earth is, in fact, round. Forget NASA’s photographs of Earth from space. Seeing is believing, as they say.

And next time I visit the Bonneville Salt Flats, I won’t bother to squint at Floating Island because I have finally seen “The Curve.”