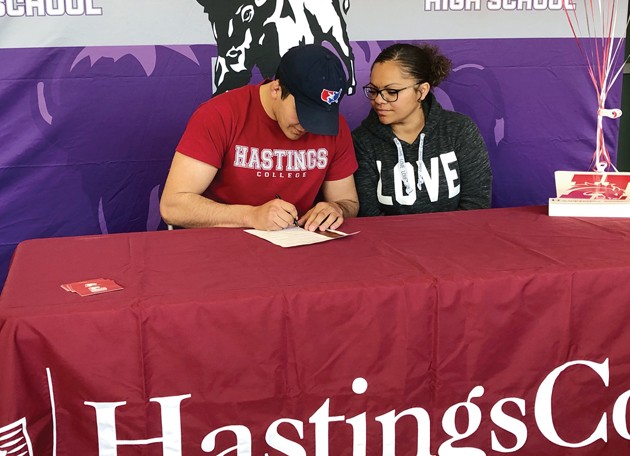 Angel Garcia, a 2018 graduate of Tooele High School, signs a national Letter-of-Intent to wrestle at Hastings College in Hastings, Nebraska, as his mother, Lorena Villalobos, looks on during a March 10 ceremony at Tooele High School.

Garcia finished fifth at state in 2017 ♦

He joined the workforce after graduation, first working on a farm before becoming a butcher at Maceys. He trained in mixed martial arts under coach Keith Azbury, winning a state jiu-jitsu title.

But it wasn’t until recently that the opportunity to wrestle again came up. Earlier this month, Garcia put pen to paper, signing a national Letter-of-Intent to compete collegiately at Hastings College, an NAIA school in Hastings, Nebraska.

However, Garcia won’t be going alone – his fiancée, Cara Romeike, has been named Hastings’ first-ever women’s wrestling coach. The two coached the girls wrestling team at Cyprus High School in Magna this past season, and found out about the opportunity while coaching the Pirates at a tournament in February.

“It’s really awesome,” Garcia said. “For (Romeike) to get her dream job and coach and wrestle and improve, it’s really cool that she’s coming with me and I’m super excited.

“I kind of got that itch when I was coaching, that itch to wrestle. I was kind of like, ‘man, I miss this feeling.’”

Romeike expressed her excitement at the opportunity she and her fiancé have as they head to Nebraska this fall.

“It’s an awesome opportunity for both of us,” Romeike said. “I’m super excited that I get to go with Angel and accomplish my dreams while he gets to accomplish his dreams, and we get to do that together.”

Garcia finished fifth at 182 pounds in the Class 3A state tournament as a junior in 2017. Tooele assistant wrestling coach Joel Spendlove shared memories of Garcia’s memorable junior year – which included a broken rib just before the state tourney after a practice session between the two – noting that his willingness to put in extra time honing his craft paid off.

“That year was probably one of my funnest (years coaching), solely because of Angel,” Spendlove said. “There was a lot of hours and time spent after (practice) in the room where he would grab me and say, ‘I just want to wrestle one more round,’ or ‘I just want to do some more drills.’ On average, we would end practice around 5 or 5:30 and Angel and I wouldn’t leave until 6 or 6:30.

“There wasn’t a day that Angel wanted to leave early. He wanted to stay and just work and work and work. Angel is the epitome of what happens when you put in the extra time as a wrestler.”

That dedication has continued as Garcia works his way back into wrestling shape. He has practiced with the team at Utah Valley University in Orem in recent weeks,  which has revealed that he still has the skills, but he also has a lot of work to do to reach his goal of making it to the NAIA national tournament.

“It’s hard to slowly get back into it,” Garcia said. “I’ve been out of it for, like, a year, so I’m going with those guys and getting beat up and slowly getting back into my rhythm. I’ve missed it, so it’s fun.”