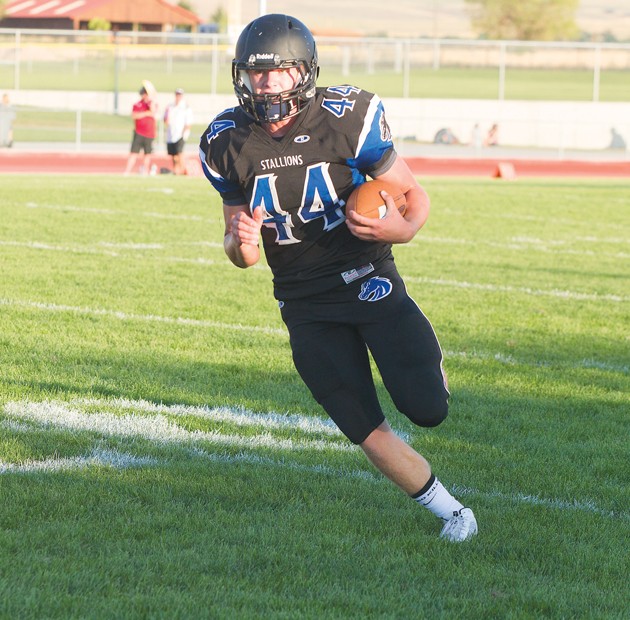 Former Stansbury star Chase Christiansen shined in the Utah State spring football game. Christiansen recorded two tackles for loss, including one of those against the first-team offense.

The former Stansbury High School star Christiansen recorded two tackles for loss in the USU spring game, and he assisted on another two. Following the game, Christiansen was all smiles and signing autographs for the young Aggie fans who invaded the field.

Christiansen said playing for the Aggies in his first semester at school has been a culture shock.

“It’s definitely a lot more work than I thought it was going to be,” he said. “I’m not very big and trying to learn everything has been a real challenge, but I feel like I’m starting to get it. I’ve got a long ways to go.”

He said every athlete at the college level is talented, so it forces him to raise his level of play.

“Everyone’s bigger. Everyone’s faster,” he said. “The linemen are really good blockers so trying to block protect is really, really difficult. It’s probably been my biggest challenge, as well as adjusting to how things develop and how fast they are.”

The leg injury that hindered him during his senior season in 2013 is completely healed, he said, and he’s feeling great out on the field.

Along with his tackles for loss, he had other plays at the linebacker position that aren’t stat plays. The most notable of those plays came against the first team offense and quarterback Darrell Garretson.

The first of those plays was when Christiansen came in on a weak side blitz. He went in with an opportunity to sack Garretson, but the quarterback noticed the blitz in time and got rid of the ball quickly for a short gain.

He then had a spy responsibility on Garretson, and as the quarterback rolled to the right, Christiansen followed. He committed to bring down Garretson, who then threw the ball away before a sack could be made. That was on third down, and the first-team offense was forced to punt the ball away.

Christiansen had a shot at an interception during his third drive against the first team offense. Garretson rifled a pass over the middle while rolling to his left, and Christiansen was slightly late on the play as the ball went past him. The ball fell incomplete.

He had yet another chance at a sack later in the second half. He blitzed and got pressure on Garretson, who narrowly threw the ball away before the sack could be made. However, the play forced fourth down, and the kicking team missed the field goal.

Christiansen had a shot at the tackle on that play, but he was held from behind and pushed aside by an offensive lineman. However, no flag was thrown.

Former Grantsville quarterback Craig Harrison led the second-team offense in the spring game. He had no touchdown passes, but he had two potential touchdowns either taken away or dropped.

The first of Harrison’s potential touchdowns came when Harrison fired a pass across the middle from 30 yards out. The pass hit Landon Horne in the hands, but he dropped it in the end zone.

On the same drive, Harrison completed a touchdown pass, but it was waved off on offensive pass interference.

Both Harrison and Christiansen faced each other for the majority of the spring game with the second-team offense and second-team battling.

One of their interactions came when Christiansen got free and chased down a scrambling Harrison. Before Christiansen could get close enough for the sack, Harrison threw the ball away.

Unfortunately, Harrison threw the game’s only interception. He threw into the arms of Devin Centers, who returned it 80 yards inside the 5-yard line.