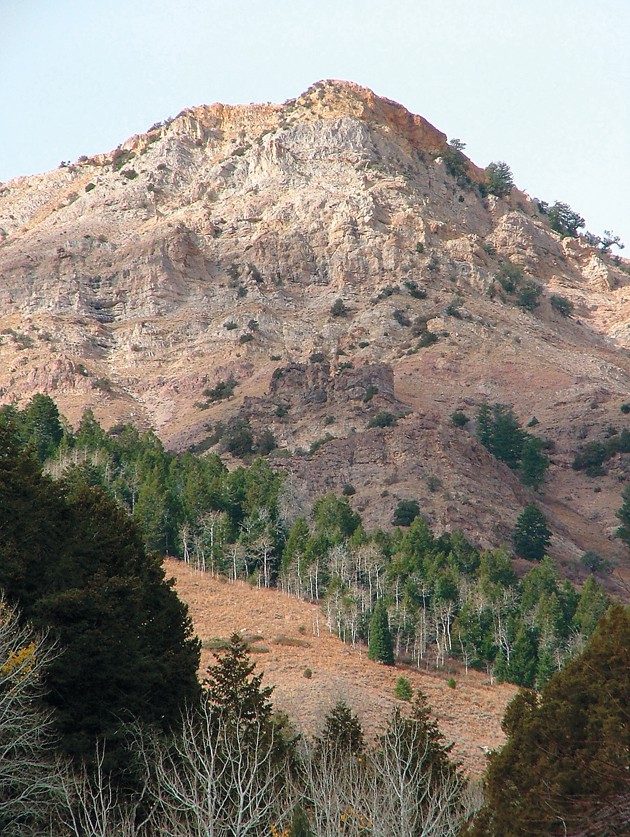 The rugged character of the east face of Davenport Peak is easily seen in this photograph.

August 22, 2013
Formidable challenge or an easy hike, Davenport Peak has taste of it all

In last week’s article, we left off on the summit of Davenport Peak in the Stansbury Mountains as the light of day faded to the west. It was a long trek to the summit and I was now faced with the dilemma how best to descend the mountain in the dark. We will pick the adventure back up from there.

On the summit, I thought to myself, I could try to descend via Davenport Canyon and use the Stansbury Bench Trail to connect back to the O.P. Miller Trailhead. But I was unfamiliar with the cliff-filled terrain at the head of that canyon, so I decided that I would descend the east face of Davenport Peak down to the area of the “Big Rock” where Forest Road 539 terminates. I could see the trail to that point in the fading light. This was a dangerous maneuver and I do not recommend it to even skilled hikers — especially not in the dark.

As often is the case when I hike, however, I convinced myself that I could do it safely and that I would save miles by taking this direct descent. I climbed carefully down the cliffs about 30 feet to a ledge below the summit where I had a totally awesome view of North Willow Canyon and the Deseret Peak area to the south. With the twinkling metallic lights of Tooele to the east for entertainment, I broke out my chow and sat there on the face of the peak and ate dinner while surveying the situation.

I turned on my small radio and Tom Petty was singing, “Here comes my girl” — then it was Jimmy Buffet’s turn with “Son of a Son.” Gotta love the weekend block parties on Rock 103.5 FM out of Salt Lake City when you are high up in the lonely hills trying to figure out how you are going to get down. I looked down the cliffs, slope and into the drainage and I picked out a large lone pine. I then traced up the hill to another large pine, and I decided that along that route I would strike a trail.

It was becoming really dark now and the moon was not providing the amount of light I had hoped for, so I was going to use those dark solitary pines as route markers that would lead me to the trail I had seen from the summit. If I could reach that trail near Big Rock, it would be an easy trek down a familiar route to my truck. When I hike in the dark in the mountains I seldom use a flashlight due to the fact that it takes your eyes 30 min to readjust to the dark when exposed to a light source. This is called “losing your night vision.” I also simply find that I get along better without one because when the light is on, you can see immediately what you shine it at but everything in the periphery is black and I don’t like that.

That being said, I always have one in my pack when I hike just in case I am in the deep dark pines or find a cave that needs exploring. I descended the summit due east using all four points of contact where necessary, choosing each step and hand hold wisely. It was totally quiet up there, it was warm, and there was absolutely no wind and I began to sweat — one part physical exertion, one part respect of gravity. When I would knock off a rock it would crash against others in the blackness and create white and orange sparks that reminded me of Fourth of July sparklers. I wondered if descents like this by animals or humans had ever caused forest fires. It was an unpleasant thought.

Even during this hair-raising descent, I noticed several patches of pink bloom cactus and a patch or two of yellow bloom cactus. As I got closer to the first large lone pine, I noticed that it was a mutant tree with three large trunks coming out of the same stump three feet above the ground level, but their branches and needles made it appear as if it were one tree. I reached this sentinel pine at 10 p.m. and attained relative safety from the cliffs and steepness of the mountain. I stopped for a moment for my eyes to find my next lone pine marker in the dark to the south. I then set off towards it.

Once I reached that pine I knew from looking down on the terrain from above that I only needed to bushwhack across the drainage and up and over the next slope to strike Forest Road 539. It was dark and the vegetation was dense. I had no idea what kind of critters were out and about. When I crossed the drainage the bushes were taller than my head and I sort of disappeared down into the creek bed where there were probably spiders, snakes and all kinds of other nastiness.

In a near panic, I scrambled my way up the other side scraping my legs and arms in the process. I eventually struck the beautiful white path of the trail sometime after 10 p.m. and I walked down to my truck. By this time the moon was lighting the meadows and peaks brightly and casting long, incredibly dark shadows from the cliffs and forests. It was a bit creepy walking down that road in the dark thinking of all the ghosts of the Indians and of any cougar that might be lurking about.

I always, however, have the comfort of my .45 pistol to keep me company and that seems to help a little. All in all it was an excellent adventure but I would point out several things. First, plan enough time to complete all of your hiking in the light. I’ve hiked hundreds of peaks in all kinds of situations for years, so I thought I could handle it and I did. However, it only takes one mishap to erase all the good fortune of the past.

Second, stick to trails whenever possible. The backcountry routes are beautiful, but they are treacherous. Know the limits of your strength, knowledge of the area and abilities. Davenport Peak is an incredible mountain that is often overlooked due to its lower relative elevation. It can be approached from Pass Canyon and Monument Canyon in the west and from North Willow and Davenport Canyon in the east.

Depending on the route you choose, this peak can be a formidable challenge or an easy, enjoyable hike. I was pleased that I had found old Forest Trail 034 and followed it all the way to the pass. This route provides easy access from North Willow Canyon to Davenport Peak. Just make sure you return the same way you came and don’t follow my descent route.