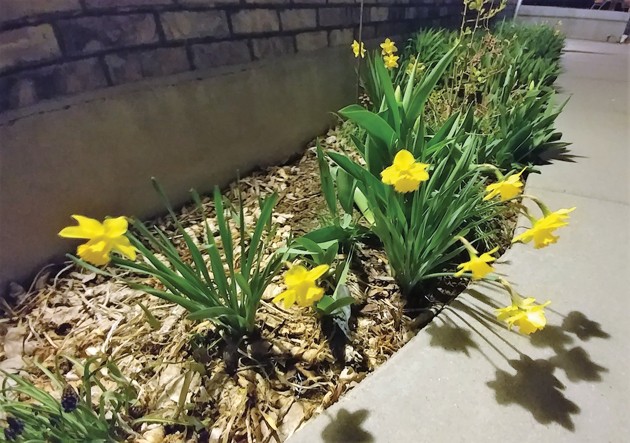 Daffodils put on a welcome show of color — even at night.

The last few days have been a jump-start into the gardening season. I’ve been able to plant onions, almost as fast as my friend Walt Barlow did. Walt and a few of us fellow gardeners batch-order onion starts, and they came in last week. Walt always seems to be a bit better prepared for getting things started than me, but he gives me something to aim for. Perhaps next year I’ll best him, but I wouldn’t lay odds on it.

Some warm days and moist soil are the perfect combo for planting onions. Onions can stand the nighttime temperatures, and getting them in the ground sooner rather than later is a good strategy for sizable produce later on. That’s because onions race against the clock to put out top leaves before the length of day triggers the bulbing process. This is something that we’ve covered before, but I couldn’t resist sharing my season’s intro into “hands in the soil” gardening activity this season.

Lest I paint the wrong picture, these activities weren’t without some discomfort. The chill in the air, and particularly in our spring breezes, calls for layered clothing. Even with some added warmth, that cold air seems to find its way down the back of the neck, or at your waist when you’re kneeling down to cultivate a section of plot or plant those onion or kale seedlings. Brrrrr!

Yet, spring is unmistakably in the near future, with the season’s fits and starts. Better yet, spring is in the yardscape as well as early perennials push their shoots up, and blooms start to show up. The trees are budding, the orchard has its share of color (alas — I fear that my apricot trees bloomed before a couple of frosts, so there’s not likely to be a major crop this go-round), and some shrubs are putting on a great display.

Around these parts, one dependable herald of spring is the venerable forsythia. It will even bloom sometimes before the snow has melted! Even if you’ve never heard of it or known its name, you’ve seen them. They are in full bloom across the valley in many a yardscape or business landscape. These shrubs possess erect and gently arching branches that are covered along the entire stems with showy bright yellow flowers. They can be compact or quite sizable.

They are popular not only for their dependable early season display, but also their hardiness and how well they are adapted for our area overall. Tolerant of alkaline and otherwise poor soils, they will flourish with minimal care, light fertilization, and full sun exposure. If they are placed in the shade, they will survive, but will not put on their full show of blooms. If fed with higher nitrogen percentage fertilizers, the stems will grow significantly, but the growth will tend to be soft and unable to support the branch and all the blooms.

Since the branches usually emanate from the base of the plant, and arch up and away from a central point, having soft branches from too much nutrients will not allow the branches to stand erect and gracefully arch sideways. Instead, the plant will look somewhat like it’s been crushed down.

Like many plants, forsythia doesn’t like to be planted where it’s soggy. Although well adapted to our area, a planting that is done in a low area of the yard, or in a bowl dug out of clay soil may struggle. For years, I didn’t understand this dynamic. After all, plants like water, don’t they? Yes, they do. But they also like (need) oxygen, and soggy soil is devoid of the level of oxygen many plant need to respire.

Stick with me on this for a moment. This seems counter to what many of us have learned about most green plants and trees — that they use carbon dioxide and expel oxygen — much to the delight of all us oxygen breathers. How does this fit with most plants needing oxygen? Well, there are actually two key processes going on. One is photosynthesis, the process whereby a green plant converts sunlight into energy through a series of steps. As you might imagine, photosynthesis happens only during exposure to sunlight, and results in the consumption of carbon dioxide and the production of oxygen. Wahoo for the planet!

There’s another less-known, but equally critical process going on, light or dark, 24 hours a day for green plants. That’s respiration. This process is where the plant takes in oxygen, through all its structures above ground. For most plants and trees, oxygen is also drawn into the root system from the very small air spaces in the soil. Too much water will fill these spaces, in essence drowning the plant. Ugly.

What about plants that readily sit in water, such as rice or plant and tree species found in swamps and moist lowlands? These types of plants often will have air spaces incorporated into the roots themselves. Air is effectively carried down to the root tips, allowing them to respire under water. Clever, huh?

Forsythia, as you might imagine, is not well suited to wet soil, so if you do plant them where it tends to be moist ongoing, be sure to amend the soil plentifully with organic material to allow moisture to drain off and draw oxygen into the soil mass.

Like any woody shrub, it can get, well, woody. It needs to be pruned about every other year. This will stimulate new growth (with young bark) along with fresh displays of beautiful early spring yellow flowers. The “one-third” pruning approach I’ve mentioned many times works quite well for the forsythia. Prune about 1/3 of the branches off in the base, another third about half way up, and the another third about 80 to 90 percent of the branch lengths. This will keep the shape nicely, and avoids the “bowl cut” that is counterproductive to an attractive and more natural looking landscape.

Forsythia is reasonably priced, and there are several varieties for choose from. Cultivars that do well in our area include Northern Gold, Northern Sun and Meadowlark. Be sure to check the mature size to see if it’s what you want for the planting space you have in mind.

The plant originates most likely in China or Korea, and is actually a member of the olive family. And, good news for us around here — it’s deer-tolerant (note that I did not say deer-proof). It suckers slowly at the base, so its size at the base will increase slowly. Said another way, it’s not invasive. However, it is relatively fast-growing, with varieties ranging from four to 12 feet round and tall. A regular pruning regimen will greatly assist in keeping the plants well scaled to your yardscape.

While the species mentioned earlier are cold-tolerant, you may see some variation in bloom. This is because in extreme cold, some of the flowering buds can be killed. This can be seen when early spring arrives and the top of the plant is not in bloom, but the lower portions are. The bottom part of the plant tends to be insulated and protected under a blanket of snow, while the tops are left out in the cold — literally.

As I have looked at spring landscape color around our valley, I’ve noticed that several early bloomers are yellow. This got me to thinking. Is there a reason for this, or is it just a coincidence or local phenomenon? As it turns out, there is a somewhat active discussion on gardening forums and science websites about this. There are varying opinions, but one sentiment I’ve seen many times is that, indeed, flowers that bloom early can attract more attention from pollinators when they are light or yellow in color. There’s even some theories that yellow or white flowers will tend to reflect more of the sun’s warmth to the reproductive structures in the flower. This would allow faster pollen production, attraction of pollinators, and help assure higher pollination rates — all leading to better survival of the variety.

Whatever the reason, a good dose of yellow blooms, be it from daffodils or forsythia (or even — gasp! — a dandelion or two) is a welcome sight this time of year. Enjoy the show!