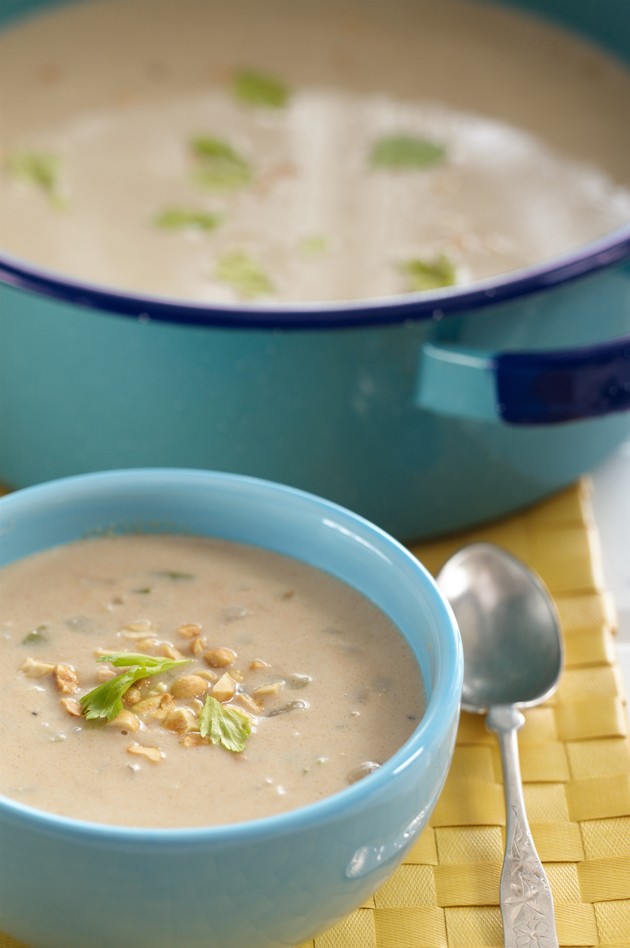 Sarah Tyson Rorer, a Philadelphia-based cooking school founder and prolific author, published a recipe for peanut soup in her influential 1902 volume, Mrs. Rorer’s New Cook Book. But by that time the dish had likely been consumed in Africa and the Caribbean for hundreds of years.

A cursory search for recipes today turns up such variations as Curried Peanut Soup and Creole Peanut Soup, as well as versions that hail from such far-flung regions as Nigeria, China, Bolivia and India.

In his 1925 bulletin, How to Grow the Peanut and 105 Ways of Preparing It for Human Consumption, tireless peanut researcher George Washington Carver devised no fewer than six variations on peanut soup. Farther to the north, the Pennsylvania Dutch even managed to come up with a soup that combined peanuts with a specialty quite popular in the region—pretzels.

Nowadays the soup is a staple in peanut country eateries of Virginia such as Southern Kitchen, The Surrey House and Hotel Roanoke, where it’s been on the menu since 1940.

The dish was been given a decidedly untraditional makeover by Chef Terence Feury who served up a Williamsburg Peanut Soup featuring crispy chicken and sliced jalapeno peppers at the Ritz-Carlton Georgetown’s Fahrenheit Restaurant. The version here is adapted from the King’s Arms Tavern in Williamsburg.

So good and so rich, this soup is a Virginia classic. This version of peanut soup is adapted from the King’s Arms Tavern in Williamsburg. This soup is also good served ice cold.

1. Melt butter in a skillet; add onion and celery and sauté until soft, but not brown. Stir in flour until well blended.