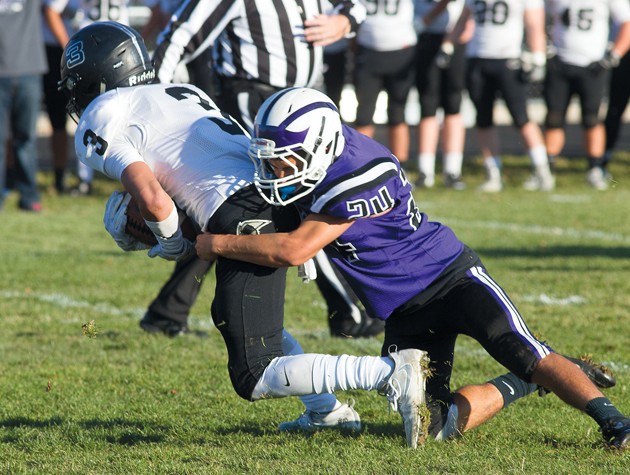 Tooele’s Matthew Vigil (24) tackles Pine View’s Michael Molten (3) during the 38-36 loss at home in the quarterfinals on Friday.

Pine View put up the first, second and third scores to start off the Panthers’ 38-36 win over Tooele in the Class 3AA quarterfinals Friday.

“In all the games that have been close this year, that’s something we’ve struggled with, is just putting ourselves behind the eight-ball early,” head coach Kyle Brady said of Tooele’s slow start that gave the Buffaloes a 17-0 deficit to overcome early in the game.

It was the fourth time this season the Buffaloes had come out to a slow start. They didn’t score in the first half at Ridgeline and managed to win on a late two-point conversion. Park City shut Tooele out in the first half before the Buffaloes took advantage of an injured Miner quarterback and went on to win by three touchdowns. Stansbury put 20 points on the board before Tooele even found the end zone in the second half and the Stallions held on to win by a touchdown.

Even after coming back to within two points, late-game heroics featuring a pair of Jeno Bins touchdowns and an onside-kick recovery weren’t quite enough to pull out a home playoff win, and Tooele won’t be making another trip to the semifinals at Rice-Eccles Stadium in Salt Lake City.

“Throughout the year we might have got away with [a slow start],” senior running back Lincoln Powers said. “But with a [Pine View] team this good, we had to come out perfect.”

This one game doesn’t take away from the success Tooele enjoyed this season: Its only other loss was from the aforementioned game against Stansbury, and the team was one of few in relevant history from Tooele to do so well.

“There’s only been a handful … of teams in Tooele High School football history to win nine games, and they’ve been playing football here for 100 years,” Brady said. “That in and of itself is a great accomplishment.”

Tooele has continually increased its win total since Brady took the helm, most recently winning seven and eight games during the 2014 and 2015 seasons — a far cry from as recent as 2011, when the team went winless.

“It sucks because now our season’s done,” Powers said. “It’s a brotherhood out here. I just want to say I love everyone on the team and hope next year’s team better get it.”

The Buffs earned a share of the league championship with their 7-1 performance in Class 3AA’s North region as part of a 4,218-yard rushing total this season. Tooele was one of five teams in the league to advance to the quarterfinals of the state tournament.

“Our offensive line this year was awesome,” Brady said, citing the rushing totals. “I think there’s only been 11 other teams in the history of the state that have done that, and that’s a big accomplishment for our team.”