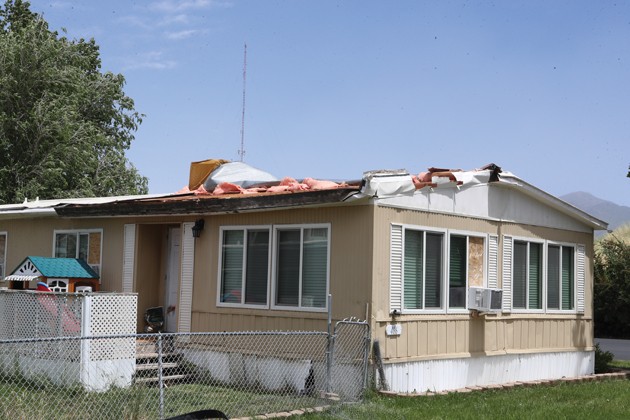 Hollie Hocchaus lost the roof on her mobile home during Friday's high winds.

Friday’s high winds huffed and puffed and blew the roof off of a mobile home in Grandview Village on the west side of Tooele City.

Hollie Hochhaus owns and lives in the mobile home with her two children, a 15-year-old and a 5-year-old.

Hochhaus wasn’t home when the roof came off, but a neighbor called her and sent a photo of her damaged mobile home. She rushed home to find that the wind had torn off the roof covering her living room and kitchen.

Hochhaus, who works as a delivery driver, said she tried to purchase insurance on the mobile home when she bought it about a year and a half ago, but her insurer told her that the home was too old to insure.

Hochhaus is now left with a mobile home with about one-quarter of the roof missing and no insurance to cover repairs.

The American Red Cross provided Hochhaus with $515 in emergency funds.

“With the damage that has currently been done from this wind storm I am looking at the possibility of having to completely rebuild this roof,” she said.