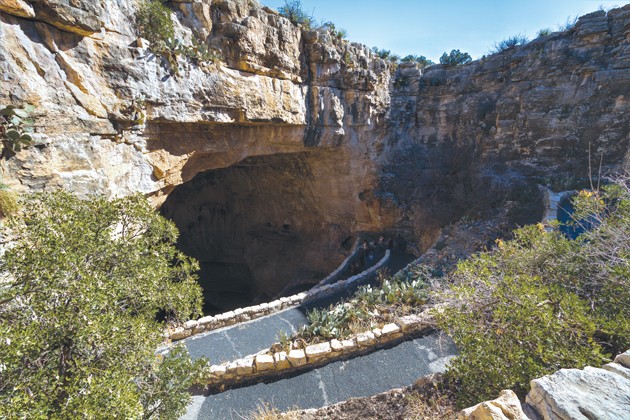 Richard Briggs learned the hard way that there is nothing in between El Paso, Texas, and Carlsbad, N.M., other than the Carlsbad Caverns.

I called my brother down in St. George Tuesday night for a little chat and realized something crazy while talking to him: This is the last week of classes at Dixie State University for the semester.

Exactly one year ago, I was frantically sending out resumes, finishing my senior project, and pretending to be interested filming Dixie baseball games on my iPad for my internship.

So much has happened in one year, but when I graduated in 2012, I thought I was heading for the loneliest and slowest year of my life.

I walked through the big red “D” on May 4, 2012, and then in the next seven days everything changed, and not just because I watched “The Avengers” in theaters four times during those seven days. On Thursday, May 10, I received a phone call from a woman in Carlsbad, N.M.

Her name was Martha Mauritsen. She was the managing editor for the Carlsbad Current-Argus, which happened to be a place I sent a resume to but had forgotten. We talked for about 10 minutes, and she offered me the job as sports editor on the spot.

I told her I needed a few days to think about it, so I hung up, and that began the longest weekend of my life. I didn’t want to move to New Mexico. I was scared, and I did all I could to find a job in St. George. Being a professional sports writer had been my dream since I was a kid. But the reality of moving away by myself to a state, where I didn’t even understand how its high school playoff system worked, scared me.

After talking with The Spectrum in St. George, I found out I was one of a dozen finalists for a reporting position, but it wasn’t a sure thing like the job in New Mexico. I knew what I had to do. I called Mauritsen on Monday, May 14, and told her I’d be in Carlsbad that weekend.

Three days after calling her, my dad and I loaded up my yellow truck and left town at 5 p.m. We reached Carlsbad the next morning at 8:30 a.m. Saying good-bye to my awesome roommates and to my family was difficult, and, yes, I cried. But I arrived in the desert town of Carlsbad, N.M., where only a three-screen movie theater existed.

My dad and I searched all day Friday and Saturday until we found an apartment for me. Then that Monday, I drove him to the El Paso, Texas, airport to send him on his way. I was officially on my own. By the way, be sure to fill up on gas before you leave Carlsbad for El Paso. It’s a two-and-a-half-hour drive with no gas stations in between. The only things on the way are some famous caves that apparently everyone in the world has seen.

Thus began a lonely summer filled with all-star little league baseball games and 76-mile drives to Roswell to see movies that weren’t being shown at the Carlsbad movie theater. I met some nice people down there, including my roommate from West Virginia, who moved there to work at the Current-Argus one month after I moved there. Martha retired three weeks after I started working at the Current-Argus, and by my 25th birthday in July, I was ready to make my way home to Utah.

The job down there was difficult. Luckily I had been trained well at Dixie State to handle it, but I wore down quickly.

Finally, one Wednesday morning in August, I saw a Facebook post from Rachel Madison, my former editor at the Dixie State school newspaper. She posted a want ad for the most peculiar job that fit right into my wheelhouse. The Tooele Transcript-Bulletin was looking for a copy editor/sports writer. This was it! My chance to return to Utah had arrived.

I talked with Rachel about the position and applied. Two weeks later, I chatted with then-editor Jeff Barrus, and then another week after that I was offered the job. I re-loaded my yellow truck and covered one last football game in New Mexico on Sept. 21. I left for Utah at 1:30 a.m. on Saturday the 22nd and pulled into my parents’ driveway at 4 p.m. that day.

On Oct. 1, I stepped through the door of the Transcript-Bulletin, and thus began the best seven months of my life — so far. (Note: A drunk driver crashed into my yellow truck while I was visiting one of my other brothers in Provo in the middle of October. That should tell you that I’m a pretty happy person because even that didn’t deter me.).

I was reunited with family and friends, and I even made new friends. It’s fun talking about BYU and other sports with Sports Editor Mark Watson. Rachel and I relive the glory days at Dixie and make fun of the things we hear about today’s Dixie. Maegan Burr frightened me until the day she left, but she warmed up to me eventually. Editor Dave Bern and I quote “The Big Lebowski” at least once per day with plenty of laughs that follow. And reporter Lisa Christensen and I both love Superman and all things dork. She even watches old episodes of “Lois and Clark: The New Adventures of Superman” to help motivate her as a journalist, which is pretty much awesome.

Even though I didn’t stay in New Mexico, I definitely learned important life lessons while there. The biggest lesson I learned was to enjoy the moment, and that lesson has also appeared in my life recently.