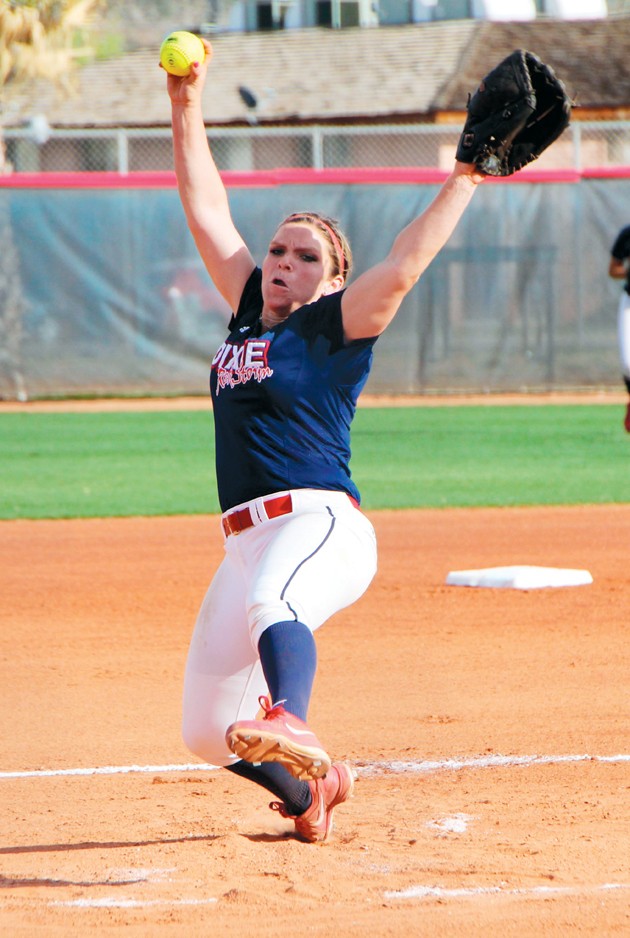 Mattie Snow spent her first two years at Dixie State University learning from the best, but now as an upper-classman and team captain, she’s sharing that knowledge with others.

Snow, a former softball star for Tooele High School, plays as part of a three-headed pitching monster for the Dixie State Red Storm. She also serves as one of the team captains, which she said has been an adjustment. 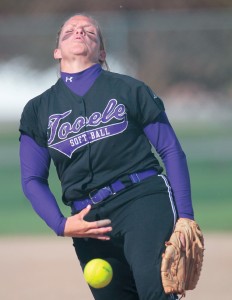 Mattie Snow, former Tooele High School pitcher, delivers a pitch against Spanish Fork in the 4A championship game on May 20, 2010.

During her freshman and sophomore seasons at DSU, Snow played behind pitchers Brittnie Miller and fellow THS graduate Lauren Folta, who earned all-conference honors in the Pacific West Conference in 2011 and 2012. With them, she learned how to work hard and still have fun.

“They taught me to have fun out there and not to let it get too serious,” Snow said. “Everyone has hard times, and everyone goes through rough patches. They taught me to work out of it and good things will come. They always taught me to be a leader to younger girls and be there for the other pitchers.”

Dixie State currently has three pitchers who can take over a game on any given day. Sophomore Michelle Duncan and Snow are the two main starters. Duncan sports a record of 13-2 with a 2.09 ERA, and Snow is 8-5 with a 3.25 ERA. Both of them started 17 games with another month left in the regular season. Senior pitcher Kate Coffey, who is 7-4 on the year with a 2.94 ERA, supports them out of the bullpen. Together, the three of them have helped Dixie State to a 28-11 record and 16-6 record in the PacWest.

Snow said they talk a lot during games and practices to focus on mechanics and strike zones. She said they’ll get together after every inning to discuss an umpire’s strike zone, and if they see a gap in someone’s pitching delivery, they make sure to point it out so adjustments can be made.

Snow said she’s found some things with her own game that can still use improvement for the end of this year and going into her senior year. She said she could still learn to be more accurate with her pitches. She also said she wants to learn to throw any pitch in any count.

With that, she also knows her strengths.

She learned winning from her experience at THS, and that’s translated into hard work at the college level.

“Winning gives me an expectation to work hard and have fun a lot,” Snow said. “Softball is all about being with the team. In college it’s more intense, but we still have fun with the team.”

Dixie State is currently in third place in the PacWest, although first through sixth place is separated by just four games in the loss column. The University of Hawaii-Hilo and Grand Canyon University both have five conference losses, and Dixie State has six.

Snow said she loves how the team is coming together at the right time to make a run at the conference championship.

“Everybody is hitting the ball well,” she said. “I wouldn’t want to pitch to our lineup. It’s hard enough pitching to them in practice.”

She said it’s all about taking things one game at a time.

“It’s a close race between all the teams in the conference,” she said. “One game could cost us the post season.”