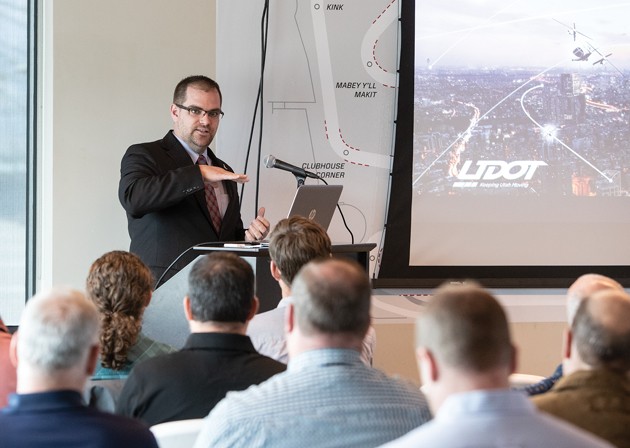 Utah Department of Transportation Director Aeronautics Jared Esselman delivers the keynote lecture on the future of drones at Deseret UAS sponsored event held at Utah Motorsports Campus on May 7.

May 28, 2019
From package delivery to other tasks, drones will become ‘commonplace’

As Jared Esselman sees it, drones completing tasks such as package delivery won’t just happen, but will be commonplace within the next decade.

Esselman, Utah Department of Transportation’s director of aeronautics, said there will be a progression, as drone package delivery progresses to the skies and the deliveries move from small packages to cargo up to 500 pounds. The uses will also become more diversified, with unique services like ambulance drones that can fly a defibrillator to an accident scene or medical needs from one hospital to another.

Esselman, who gave a guest lecture at the Tooele headquarters of Deseret UAS earlier this month, said drone delivery will most likely start in a commercial-to-commercial setting. Moving product from a distribution center to a retailer, for example, is the most likely start, as home delivery with a single-package payload drone is fairly inefficient, he said.

So while drones are expected to take to the skies in the near future, UDOT is laying the groundwork to make it happen safely and efficiently. In the same way UDOT builds roads to accommodate ground vehicles, drones will also have corridors to follow in the sky.

Many of those transportation corridors will likely mirror public roads, to alleviate privacy concerns of aerial drones outfitted with cameras and other devices, according to Esselman.

UDOT teamed up with students at the University of Utah and the Federal Aviation Administration to create “Drone Commander,” software, which simulates the possible flow of future drone traffic in Salt Lake City. Esselman said “Drone Commander” works as a traffic simulator for drones, identifying possible chokepoints and other stumbling blocks for aerial drones in a city.

While UDOT plans for the transportation elements of drones, the equipment that is expected to be overhead soon is being tested at facilities including Deseret UAS, a nonprofit collaboration between the state and Tooele and Box Elder counties. Deseret UAS was founded in 2018 with the help of a $1.2 million grant from the state of Utah.

The test sites operated by Deseret UAS in Box Elder and Tooele counties include a 4,500-foot paved runway with a covered airplane hanger, mobile test units and training facilities.

“They really are hoping to be that test site or test range,” Esselman said.

UDOT is also partnering with the Nevada Institute of Autonomous Systems, which has been testing commercial drones in Reno.

Esselman said it’s important to remember the drones being tested now are more than pie-in-the-sky concepts — you can sit in them, test them and they fly. The aircraft certification process is long, however, so it will take years for some to be available commercially.

Beyond the more modest drones expected to be the pioneers of commercial traffic, Esselman said there are package delivery drones and even aerial taxis that are ready for maiden test flights. With a variety of drones being tested and certified, it’s now up to UDOT to create the system to go with the vehicles, he said.

Drones are already permitted for a variety of uses, including aerial photography, bridge inspections, mapping construction sites and traffic monitoring. For more on the state’s current policy on unmanned aircraft systems, visit udot.utah.gov.