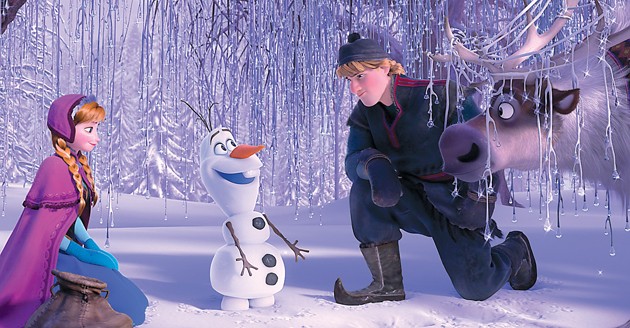 Disney’s newest movie is a fun, frosty adventure, but its songs might leave audiences cold. Get the theater to fast-forward through those and you’ll be fine.

Loosely based on Hans Christian Andersen’s tale “The Snow Queen,” “Frozen” is about a princess, Elsa (voiced by Idina Menzel), who has the power to conjure snow and ice, and the drastic steps she takes to shield her ever-sunny sister, Anna (voiced by Kristen Bell), from those unpredictable abilities.

After a childhood accident endangered Anna, Elsa became a recluse, but is forced back into the public eye when, following the death of their parents, she is crowned queen.

Things take a nosedive when Anna becomes engaged to Prince Hans (voiced by Santino Fontana), whom she met earlier that day, and the strain causes Elsa’s powers to unleash, burying the kingdom in snow and ice in the middle of summer. Elsa flees, and Anna follows, leaving Hans in charge of the kingdom.

En route, Anna finds an ice salesman, Kristoff (voiced by Jonathan Groff), whom she convinces to lead her to Elsa. The trio of Anna, Kristoff and his trusty reindeer, Sven, is rounded out by an animate snowman, Olaf (voiced by Josh Gad).

Elsa’s powers, though, are volatile, and when Anna finds Elsa, holed up in an ice castle, Elsa inadvertently harms Anna. Meanwhile, back at the kingdom, the effects of the unseasonable winter are no match for the political turmoil brewing.

The characters in “Frozen” are not necessarily complex, but they are surprisingly fleshed out. The writing is sharp, which makes up for the slightly strung-out feel of the plot. The funniest moments come from Olaf, but Kristoff, Anna and Sven are no slackers—it’s laugh-out-loud funny, according to the theater screening packed with parents and children.

The graphics are beautiful, too, and do a great job of visually highlighting the beauties and dangers of Elsa’s power (which, at the cusp of winter, could easily be adapted to non-magical snow and ice, as well).

“Frozen” also feels like Disney is trying to make a throwback to its earlier animated films. A short at the beginning meshes a Walt Disney-voiced, black-and-white Mickey Mouse with CGI in one of the better uses of 3D I’ve seen.

Throughout the film, too, the story seems to be cognizant of some of the common themes in previous princess movies, such as love at first sight to a handsome prince and the unstoppable power of true love’s first kiss, and—I hope this doesn’t qualify as a spoiler—questions their evergreen validity.

That being said, where “Frozen” falls short is in its music. The original songs, by Christophe Beck and Kristen Anderson-Lopez, feel awkward in their placement and are largely forgettable. I only saw this last night and I can’t remember a single one. Wait, no, I just remembered one part the snowman sings. So there’s one.

I want to clarify that I’m not against songs in movies on principle, and I feel like many of Disney’s musical efforts have been successful—“Beauty and the Beast” and “The Lion King,” for example, and many others had songs that didn’t felt almost natural and became classics in their own right. This is just not the case in “Frozen.”

But if you ignore the songs, “Frozen” is a lighthearted, timely adventure that would be worth a trip to see this holiday season.

Bonus: If you’re the type that is inclined to stick around through the credits, there’s a funny disclaimer towards the end of the credits and a short scene soon after. Neither are earth-shattering, but if you don’t mind waiting another five minutes, they should give you a chuckle.