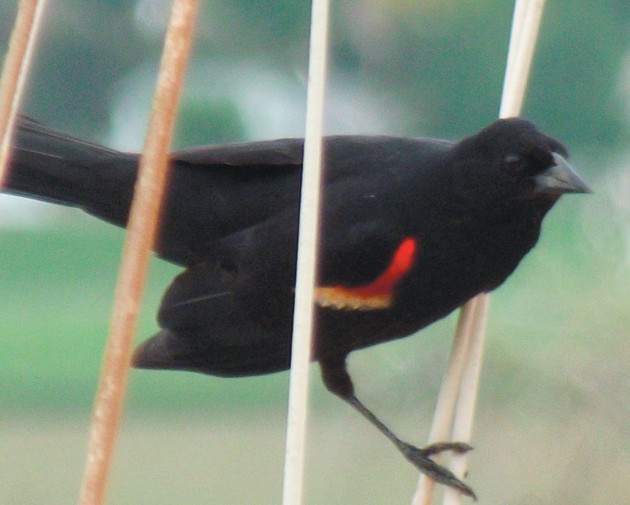 A male red-winged blackbird perches in the foothills east of Erda. The males’ scarlet red and yellow shoulders make them easy to spot when they are in flight.

In Tooele County and more than half of the United States, the red-winged blackbird is quite noticeable. They can be seen throughout our county and if you look closely, the males’ scarlet red and yellow shoulders are excellent eye-catchers during flight.

Red-winged blackbird males are coated in black with red and yellow shouldering. The females resemble oversized sparrows. They are brown with darker streaks. Males are very territorial and they patrol their chosen territories. They are often found with several mates, varying between two and 15 females, for they do not mate for life. In fact, the females find different sites each year to nest, whereas the males will return each spring to the same spot.

Another interesting fact is that young red-winged blackbirds will first brood more females than males. When they become middle-aged, they will brood about the same ratio of males and females, and then in their older years, they will brood more males than females. After raising a brood, typically two to three times a year, the female red-winged blackbird will build a new nest.

Because they share the same territories, marsh wrens and red-winged blackbirds quarrel because they both eat each other’s eggs. When their area is intruded by predators, especially around nesting sites, males are known to mob together and “dive-bomb” trespassers. Be careful, because they do this to humans too.

If you’re looking to find these magnificent birds, male and female red-winged blackbirds can be spotted in their preferred habitats such as swamped vegetation, wet meadows, marshes, croplands, fields and irrigation canals. The miniature ponds that line the Great Salt Lake along I-80 are an excellent place to view these fowl.