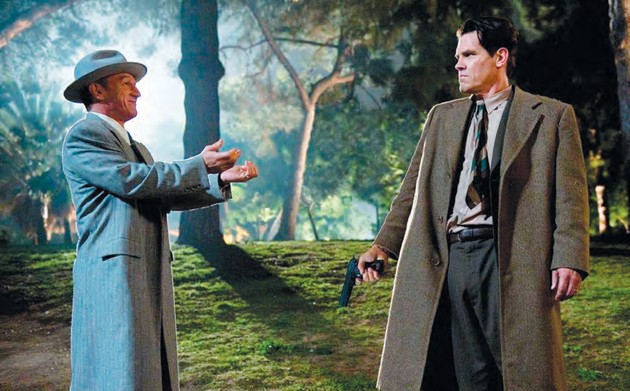 January 17, 2013
‘Gangster Squad’ takes audience on a fun and stylish, yet gory ride

Like using fire to fight fire, “Gangster Squad” teaches us that the best way to take down a blood-thirsty mob boss is to send a group of equally violent cops after him.

Well, maybe the cops aren’t quite as bad, but more than once the film asks itself just how different the two sides are. Loosely based on the true story of police foiling mobster, Mickey Cohen, and his plan to get all of Los Angeles into his gang’s clutches, “Gangster Squad” uses every play in the mafia movie book to make a thinly developed, but fun movie — if you can stomach all the blood.

And, boy, is there a lot of it. In case the audience had any doubt about the kind of movie they are in for, we see an ultra-sadistic Cohen (Sean Penn) send a rival gangster up the river, as it were, by pulling him apart with two pretty classic cars. It’s good to start out in the deep end so you’re not too shocked later when he burns three of his failed cronies alive in an elevator, or when a guy gets a lesson literally drilled into his head.

It’s 1949, and Cohen has bought off half of the cops, most city officials, and is on the verge of ruling L.A., when one of the last straight cops, Chief Parker (Nick Nolte), recruits an honest, but tough-as-nails detective named John O’Mara (Josh Brolin). Parker wants O’Mara to form a small group of cops to take Cohen down via guerilla tactics.

“This isn’t a crime wave,” Parker says in the first of many parallels drawn between the mission and the cops’ previous service in World War II. “This is enemy occupation.”

It takes a little trial and error, but they quickly gain the cooperation and trust necessary to go knocking on the door of someone as powerful as Cohen. Meanwhile, Wooters has fallen for Cohen’s girl, Grace Faraday (Emma Stone). But Cohen didn’t get to where he is by being stupid, and he catches on, and goes after the group — and their families — in full force.

The sets and costumes are great, especially the fleet of Fords, Cadillacs, Oldsmobiles, Chevrolets and other classics from the 1930s and 40s filling the streets (fair warning to car lovers: some vehicles were harmed in the making of this movie). The movie fails to back up the luxe and style with character-driven substance — whether or not it skimped on back stories and other means of fleshing out the characters on purpose, or as an oversight, I had a hard time caring when most were in peril.

That hollowness is particularly discouraging because of the immense talent involved. Nolte, Brolin, Gosling, Stone, Peña, Patrick, Penn — all of them are at least fairly reliable hitters. No one turned out a terrible performance, but it all could have been so much greater.

This movie also made me ask some strange, uncomfortable questions I’ve found are not well received in polite society. Questions about how much horsepower it would take to actually rip a person in half, and whether or not the chain arrangement shown would provide the necessary support to accomplish that. Questions like if a drill is really the most effective way to kill a man, and if gangsters are contractually obligated to continually devise new, inventive ways to kill people, because their methods of disposal would otherwise be impractical.

I realize this is fictional, but I, at least, found such questions disrupting to the requisite suspension of disbelief.

“Gangster Squad” is not bad, but with the source material and caliber of talent both in front of the camera and behind the scenes, it could have been much better. On the other hand, everyone does seem to be having fun, and that helps distract the audience from the lack of depth and bring them along for the ride — as long as they don’t get caught up in the gore.