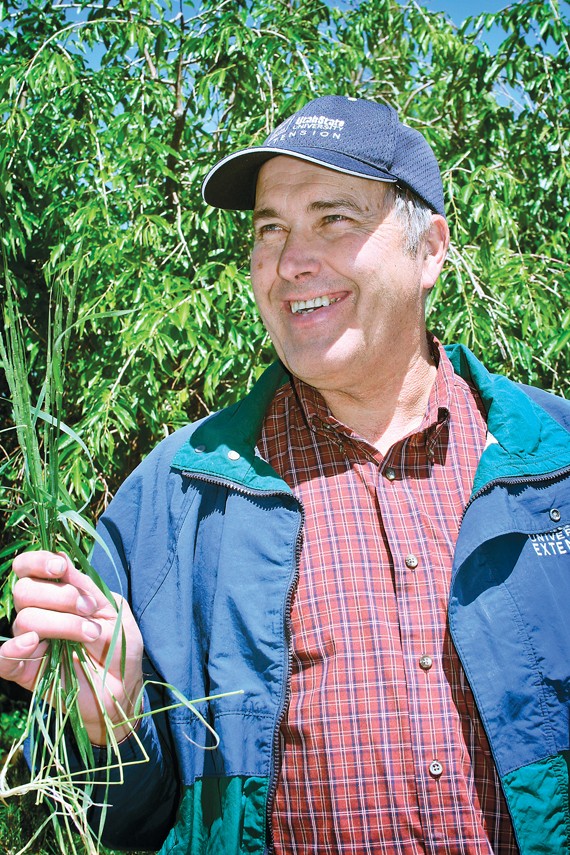 Larry Sagers poses with a plant at a Master Gardners event in May 2007. Sagers died Tuesday at his home in Erda after a year and a half battle with mesothelioma.

Larry Sagers, who died at age of 63, was mentor to an entire state ♦

Utah has lost the man who, more than perhaps anyone before him, made the desert bloom.

Larry Sagers, a long-time Tooele County resident who spent his life teaching others how to grow trees, plants and flowers, died at his Erda home Tuesday morning at the age of 63 after a year and a half battle with mesothelioma.

Sagers spent 31 years as a Utah State University Extension horticulture specialist, but he was perhaps most widely known for his weekly radio show on KSL, “The Greenhouse Show,” which he co-hosted for more than 20 years. He wrote a weekly column for the Deseret News for more than 15 years, touching on various topics related to plants and gardens. He also occasionally contributed to the Transcript-Bulletin.During the course of his career, Sagers was given several local and national honors, including being given the National Association of County Agricultural Agents Distinguished Service Award in 1994 and being inducted into that organization’s Hall of Fame in 2008.

Sagers was born and raised in Tooele, where he met his wife, Diane. After serving an LDS mission to England he earned a bachelor’s degree in horticulture and agronomy from BYU. He went on to earn a master’s degree in plant science from Utah State University in 1975, and he, his wife and his two brothers ran Tooele Floral in Tooele for several years. In 1981, he began working at the USU Extension as a horticulturist, first in Millard County, and then at the Salt Lake office. Most recently, Sagers was the regional extension horticulture specialist, covering Davis, Salt Lake, Tooele and Utah Counties. He and Diane also spent 10 years in a service mission for the LDS Church as garden guides on Temple Square.

Sagers had a massive influence on gardening culture both across the state and in the county.

In 1997, after a handful of gardeners from Tooele County made the trek to attend some of Sagers’ master gardener classes at Thanksgiving Point, he started teaching the four-year course in the county, assisted during the first year by other local members. Joyce Tate, a master gardener who occasionally worked with Sagers as a secretary for the USU Extension in Tooele, said she was one of those first students.

Some of the classes were on the same topic, she said, but Sagers’ zeal and style of teaching made them feel fresh each time.

“He’d change it, and he’d get new information and present it in a new way,” Tate said. “He was always changing, always improving. I think I’ve taken how to grow perennials from him four times and every time it was a new approach, a different way, new plants that had come out.”

Gary Fawson, another master gardener, believes what made Sagers’ teaching style so effective was the raw passion he had for his subject.

“He shared that with so many people, and I don’t think anyone has impacted the gardeners in Utah as much as he has,” Fawson said. “And his knowledge — it’s going to take three or four people to replace him on Saturday morning on the KSL greenhouse show. He had an absolute handle on the facts. He knew so much.”

Tate said Sagers was always willing to address questions or examine problem plants to try to determine what was wrong with them and what could be done to fix them.

“I don’t think there’s anybody who’s ever had a garden or a yard who’s not had a gardening problem,” Tate said. “You need somebody to turn to if you don’t know how to handle it. I’m sure he’s tried to teach us everything, but he couldn’t. Tooele was really fortunate that we had him. We could count on Larry to bail us out.”

Sagers and Diane, who is a regular contributor to the Transcript-Bulletin, also led garden tours. The couple took dozens of trips to out-of-the way nooks and hidden pockets of Eden across North America, England and Holland. Tate said the gardens toured were frequently so off the beaten path that even their bus drivers and tour guides had not heard of them, but Sagers’ knowledge still extended to those far-flung corners.

“Larry would know amazing things. You’d point to a plant and ask what it was, and he’d tell you, and you’d ask, ‘Will it grow in my yard,’ and he’d say, ‘Probably not,’ or, ‘You might want to try it,’” Tate said. “Very, very rarely did he not know the name of a plant, and if he didn’t know it, he’d find out before the trip was over.”

Fawson also went on several tours, but said it was his relationship with Sagers that perhaps most drove him to create a lush garden of his own.

“His friendship made me want to be a better gardener so I could show him what his training could accomplish,” he said. “Many of the trees he suggested for our yard in Grantsville have been outstanding because he knew that they worked in other places and said your soil looks like this so it may work. He’s certainly going to be missed by all the gardeners and even people who aren’t gardeners in Utah.”

“He’s probably the smartest man I’ve run into, not just horticulturally but well-rounded in other facets in education. But he was so humble in the knowledge he had and so willing to share it with other people,” Hughes said. “He always had great patience and many people have said he would answer the same question umpteen times as if it were the first time it was asked, and he never made anyone feel guilty for asking what turned out to be a pretty simple question.”

Sagers guest-hosted on the show beginning in 1982 and took over as host in 1984. Hughes joined him as co-host in 2001. Sagers could nearly always answer any question he was thrown, Hughes said, and sometimes the men would find themselves in a position of settling garden questions in order to smooth out marriages.

“Some people would tune in just to see if anyone could stump him, because he’d answer 99.9 percent of questions and if he couldn’t answer it, the description of the plant or disease or bug wasn’t specific enough, so people would send him photos and he would diagnose it from that,” Hughes said. “When a wife would call saying her husband wouldn’t believe what she said should be done to a flower or a tree, we’d turn our hats backwards and go into what we called ‘marriage counselor mode.’ We’d see if we could save a marriage and a plant at the same time.”

Sagers was back in the studio Saturday for what turned out to be his last time on the three-hour show. Hughes said immediately after the show was over, Sagers left to teach a half hour-long class. His tenacity and insistence on continuing his work even after his diagnosis and when he began to decline was remarkable, Hughes said, and he tried to keep the severity of his condition as private as possible. In addition to continuing to teach his classes and write his weekly columns, Hughes said, he only missed a few shows for both surgeries and garden tours.

The Greenhouse Show will continue to be broadcast, Hughes said, but decisions of who can replace Sagers, if any one person can, have not been decided.

Even with her years of experience, Tate said, she still learned new things from Sagers every time she listened to one of his radio shows, read one of his columns or attended one of his classes, including a presentation given to the master gardeners at their most recent meeting a week ago.

“He presented the program, as bad as he was,” she said. “I didn’t know the end was that close. I don’t think anybody did. But we sent a card around and thanked him for all he had done for us and everything he had meant to us. It’s going to be a real loss for not only Erda and Tooele but for the state itself. He’s going to be really missed.”