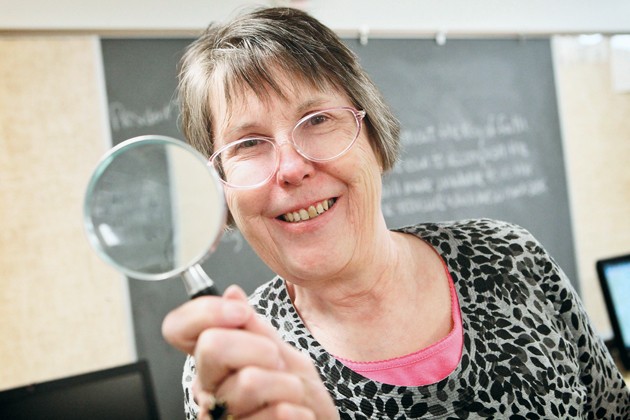 She sits in a quiet room under the dimmed lights searching intently for something — or more precisely — someone. She is a private investigator of sorts with a mystery to solve and she’s armed with a camera and roll of microfilm.

C. Lynn Andersen, 59, of Tooele, is an Accredited Genealogist®. She’s highly trained in finding what she is looking for. That is just one factor that sets her apart from the average genealogy sleuth.

“That’s the important piece,” she said. “Anybody can look up records, but not everybody can tell the significance of what they’ve found.”

She has spent several hours probing the information available in the vast second story room of the Family History Library in downtown Salt Lake City, scrolling through microfilm faster than any untrained eye would be able to read the pages. Occasionally she stops to scan a page. If she sees something she thinks may be of value to her search, she takes a photo of the page, then continues scrolling at breakneck speed. Later, she will use the photos she is taking to create a spreadsheet of information for analytical purposes.

There are only a handful of Accredited Genealogists® in Utah and each has their own specialty, according to The International Commission for the Accreditation of Professional Genealogists, or ICAPGen. Andersen is the only Accredited Genealogist® in all of Tooele County taking private clients. Andersen’s specialty is the mid-south states, which include Virginia, West Virginia, Kentucky, Tennessee, North Carolina, South Carolina and Missouri. This means she is an expert at records discernment from those states.

She is not always at the Family History Library. She also researches at home on her computer or wherever she thinks she may best find what she is looking for.

“Today more and more records are available online, but there still is sometimes a need to write or visit courthouses, other archives, cemeteries, historical societies and even obscure places where records are kept, like someone’s attic,” Andersen said.

Andersen’s clients generally hire her when they have hit a wall and cannot find who or what they are looking for.

“Typically a client will send me information on what they are trying to find and accomplish,” she said. “Most of the time they hire me because they are stuck and can’t get past a certain person.”

This is where her document recognition expertise and analytical skills prove to be a valuable resource for her clients. When a client purchases the services of Andersen, they are paying for her time and research as well as a report that outlines what she found.

“I will take whatever information that they send me and figure out what their goal is,” she said. “Then I will take that information and break it down and look to see what the information suggests or what records I might find that in.”

After she analyzes the information she is provided, she looks for specific records where she thinks she may find the information needed to complete the project. After thorough research, she documents her time spent and information found. At the end of a project she sends her clients a report and provides access to photos of the records that prove her conclusions.

“At the bottom of my report I always include a section called ‘My Observations, Concerns and Conclusions,’” she said. “This is the important part because it’s what differentiates me from the lay person. It is my take on things as a professional. I am able to explain why specific records are important and how it provides proof that what I’ve found is what they are looking for.”

For example, in her current project, Andersen is perusing the information from personal property tax documents from Virginia between 1830 and 1850. Nearly on the last page of the final microfilm of the day, which took her more than an hour to run through, Andersen had a “eureka moment” and got excited.

“Ah, there’s George,” Andersen said. “This is the guy I’m looking for. I haven’t seen him before now.”

In her current project, Andersen has the task of looking for relatives of her grandchildren from a previous marriage — one in particular. She has his name and is trying to connect him with his parents so she can continue the family tree. The enthusiasm of finding his name in the documents is obvious. Though this particular project is a personal venture and not for a paying client, it is with the same enthusiasm that she works for her clientele.

Though her accreditation specializes in the mid-south states, her research often leads her all over the world.

One such project was for a client from North Dakota. Andersen traced his family ancestry to Ireland, Russia and Germany. She began working with this particular client in 1997 because he had hit a wall in his own research.

Her client had traced his father to the orphan trains and even had a copy of his father’s birth certificate, but he could not find his grandparents, Eliza Sharkey and John Lynch.

“His father was an orphan train rider back in the early 1900s in the Manhattan area,” said Andersen.

As a precursor to foster care, orphan trains were an effort to rescue poor and homeless children from dire circumstances. The endeavor began in the mid 1800s because the economy had suffered so badly. Parents would send their children to the orphanage because they could not take care of them. Orphanages became so overrun that they began sending children to the Midwest to families willing to foster them. These children became known as orphan train riders.

Andersen received the birth certificate from her client and noticed Eliza and John were from Ireland. Because Eliza and John were not married, she could not find them together on any records and was having trouble associating them to make sure she had the right family.

“His grandmother, although she had an uncommon name, did not show up on any records,” Andersen said. “I almost quit on him but he pleaded with me to keep going. This was before the Internet was popular. So we developed a system to have him check with me periodically to see if anything changed.”

It wasn’t until 2005 when the Internet became readily accessible and genealogical records became available online that Andersen had her first breakthrough in his case.

She was doing an Internet search for another client’s project when she noticed a new resource that would be helpful to her North Dakota client, the New York City Death Index.

“On a whim I used this resource, which led me to finding Eliza’s death certificate,” Andersen said.

The information on Eliza’s death certificate guided Andersen to possible relatives in Ireland, but she could not prove a relationship through a paper trail. The project took a lot of tenacity and persistence to complete. In the summer of 2010, 13 years later, and with the advent of DNA testing, they were finally able to validate those findings.

It’s that same determination to succeed that gives Andersen’s clients their confidence in her abilities and continues to fuels her passion for genealogy.

“I have an innate drive to solve the mystery,” she said. “Ask me a research question and it will be there in my brain until it’s answered.”