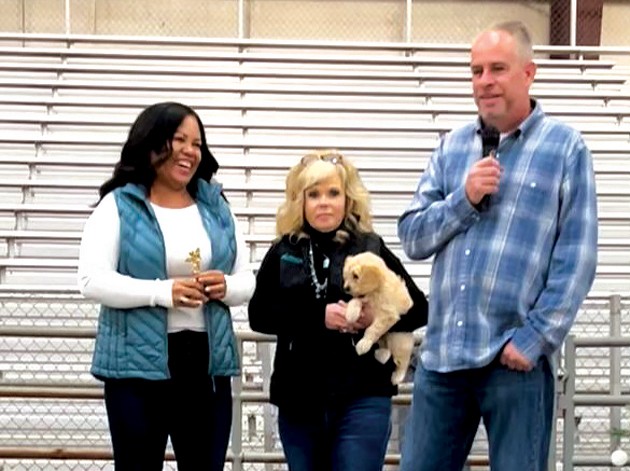 Maggie Mondragon receives the George Bailey Award from the Life’s Worth Living Foundation during their “It’s a Wonderful Life” festival on Saturday.

Life’s Worth Living Foundation recognizes a local resident each year ♦

The Life’s Worth Living Foundation awarded their 2021 “George Bailey ‘’ award to Maggie Mondragon during their “It’s a Wonderful Life” this weekend at the Deseret Peak Complex indoor arena.

The Life’s Worth Living Foundation is a local nonprofit whose mission is suicide education, prevention and awareness. They present their “George Bailey” award during their annual festival. The award and the festival name come from the 1946 film, “It’s a Wonderful Life.”

The main character of the movie is named George Bailey. He struggles with suicidal thoughts, but is visited by a guardian angel who shows Bailey what his town would look like if he hadn’t done all of his good deeds throughout the years.

The award is given to someone in the community who has made a difference related to suicide in the county, according to John Gossett, founder of the Life’s Worth Living Foundation said.

“We like to give the award to someone who goes above and beyond,” Gossett said.

This year the award, which is a brass bell with angel wings on it, was given to Maggie Mondragon, a member of the foundation.

“I got involved with the Life’s Worth Living Foundation about four years ago,” Mondragon said. “Two years ago, Jon asked me if I could get some trees donated to give back to the community during the It’s a Wonderful Life Festival.”

The trees were donated to individuals who needed a Christmas tree or had lost loved ones to suicide and the foundation still gives the trees away each year at their festival.

Since then, Mondragon has been helping with the trees each year during the festival.

Mondragon, who also helps the foundation with the Foundation’s annual Walk to Wendover  event, has helped several individuals close to her who struggle with mental illness, and has created an LGBTQIA+ support group.

“Maggie has been involved in our community coalition for years,” Gossett said. “She helped start and run the unconditional support group for our LGBTQ group. She has helped with the festival getting trees donated for those in our community in need… Where she is asked to help, she jumps in.”

“My participation really started with the festival, and I was really attracted to the people and the event,” Mondragon said.

In the future, Mondragon wants to continue to help prevent suicide in the county and help those struggling with mental illness.

“I would love to have more events that would bring people facing suicide and mental illness into the community,” she said. “It would be cool to have more interactive events with real people speaking about dealing with mental illness.”

Mondragon plans to continue to help with the Christmas trees each year.

“It was a shock to receive the award… I do this to give back to the community and the foundation, because I am passionate about this,” Mondragon said.