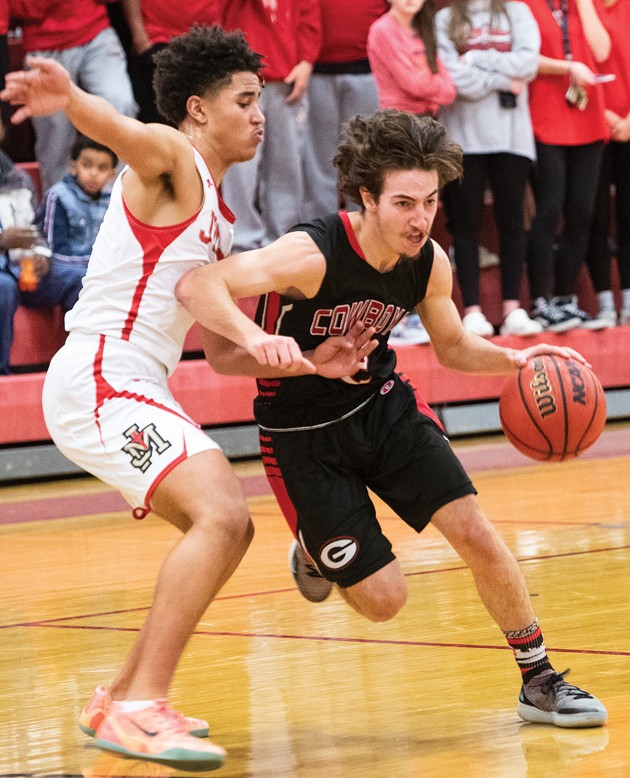 “We needed all those foul shots to win,” Grantsville head coach Bryan Detweiler said. “It was spotty tonight, at times.”

The Cowboys went 9-of-15 from the free-throw line in the final quarter, helping them to their third league win and placing them in a fight for the league’s No. 3 seed in the state tournament.

It was just enough to stave off a 19-point comeback bid in the fourth quarter.

“I think they know they’ve got more basketball to play, and they want to keep going and keep fighting,” Detweiler said of his team. “I think they’re resilient. They haven’t given on up. They’ve battled.”

During the final two minutes of the first half, the Cowboys went on an 8–2 run to earn a 38–28 halftime lead — highlighted by a pair of made shots from the short corner by sophomore center Davin Ekins and junior forward Kayden Bohman.

Summit Academy went on an 8–2 run of its own to open the second half, as sophomore guards Court Walker and Zackary Englebright each drilled 3-pointers to make it a four-point game with 6:25 to go in the third quarter.

Grantsville pulled away again when freshman guard Carter Killian hit a 3-pointer to make it 48–42 with 3:39 left to play — Grantsville’s final field goal of the contest.

The Cowboy defense limited Summit Academy to only two field goals during that span.

Grantsville senior forward Isaac Riding led the Cowboys with 12 points, 10 of which came from his 15 attempts at the free-throw line. Junior forward Jackson Sandberg added another 11 points. Eleven Grantsville players scored in the win.

“They’re not going to give up, they’re going to keep fighting,” Detweiler said of his senior class. “I think they show that through the effort, plays will happen. They keep working. I think their intensity on defense is going to rub off on the underclassmen.”

Judge Memorial guard Mac Tarver scored a game-high 23 points as the Bulldogs dismantled Grantsville 82–51 in the final game of the regular season on Monday.

“Is that our best? Is that the team that beat South Summit?” Detweiler said. “I saw Manti coaches in the gym today. They got a full view.”

The Bulldogs jumped out to an early lead behind a defensive stand that held the Cowboys off the scoreboard for nearly four minutes after tipoff. Grantsville scored twice from the field in the first quarter, falling behind 19–9 after one.

Then in the second, freshman guard Carter Killian gave the visitors some spark with a pair of 3-pointers to pull the Cowboys to 29–17 with 4:58 left in the half.

Judge Memorial led 38–27 at halftime and extended the lead to 25 at the end of the third quarter.

With the win, Judge finished third in region and will face Delta in the opening round of the Class 3A state tournament at Orem High School on Saturday.