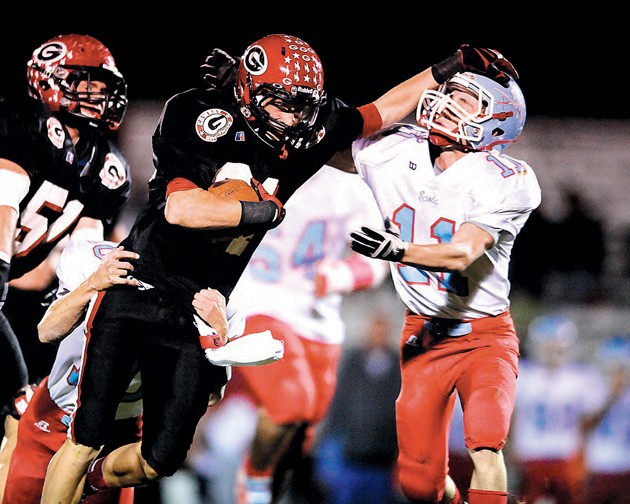 Grantsville’s Dallin Williams runs the ball Friday against Ben Lomond. The Cowboys shut out the Scots 33-0.

Nothing puts the icing on cake for homecoming week like a blowout victory on the football field, and that is what Grantsville was able to do over Ben Lomond Friday night. It wasn’t the most crisp performance for the Cowboys as they didn’t score in the opening quarter and committed some head-scratching penalties. But Grantsville’s defense got the job done in a 33-0 shutout victory over Ben Lomond.

“I feel pretty good about the win,” said Grantsville coach Tony Cloward. “There were some things to clean up and that comes naturally with homecoming.”

Grantsville held Ben Lomond to a total of 85 total yards and even added a safety on the defensive side while Ky Fisher was getting the job done on offense. Fisher scored three touchdowns on the ground and totaled 130 yards at the time of his third touchdown late in the fourth quarter.

Both teams suffered a sluggish start from the beginning as Ben Lomond started the game with a turnover on downs and a punt on their first two possessions, and Grantsville lost a fumble on their first possession.

Starting a drive with 4:17 left in the first, Grantsville got going on the ground. Kaleb Ware broke off a big run of 19 yards early in the drive. Lane Sutton and Fisher each picked up first downs with runs of 11 and 7 yards to get the Cowboys deep in Ben Lomond territory. Jared Lambert finished off the drive with a rush straight up the middle for 13 yards and a 7-0 lead with 11:09 left in the half.

A bad Ben Lomond punt helped give Grantsville great field position and a chance to build up their lead. Kelby Landon hit Fisher with a 24-yard reception to begin the drive and then Fisher ended the drive with a 19-yard touchdown run around the right end for a 14- 0 Grantsville lead with 7:32 left in the half.

The Cowboy defense came through with points of their own when a botched punt attempt by Ben Lomond turned into a safety and a 16-0 Grantsville lead with 5:21 left in the half.

Grantsville’s big plays and Ben Lomond’s penalties helped to extend the Grantsville lead just before half. Dillon Hutchins started off the drive with a 17-yard rush for a first down. Fisher had a rush of nine yards amplified by a facemask penalty by Ben Lomond and then Landon hit Fisher with a sevenyard reception and the Scots added a personal foul penalty to allow Grantsville to get deep into Ben Lomond territory.

Fisher capped the drive with a one-yard dive up the gut to give the Cowboys a 22-0 lead that held up until halftime.

Grantsville had a turnover on downs in their first possession of the second half but made up for it on the second possession. Fisher picked up a pair of rushes for five and 19 yards that converted first downs and then Landon was able to hit Fisher for 32 yards to get close to the end zone.

Grantsville had to settle for a 30- yard field goal that Ethan Steinfeldt rammed between the uprights for a 25-0 lead with 7:13 left in the game.

A turnover on downs by Ben Lomond helped give Grantsville the ball only 34 yards away from another score. Fisher capped the scoring in the game with a 31-yard rush up the middle for a touchdown. Injured quarterback Max Hall, who had been holding the extra points with a cast on his foot, picked up the ball on the point after attempt and threw a pass on one good leg to Jacob Riding for a two-point conversion and a 33-0 lead that held up as the final score.

“We are pretty excited because we haven’t felt like we have hit our peak yet,” Coward said. “The second half of the region schedule is very difficult and Grantsville football teams have the tendency to play their best ball down the stretch.”

Grantsville, now 2-1 in Region 11, will travel to Garland on Friday to face Bear River at 7 p.m.