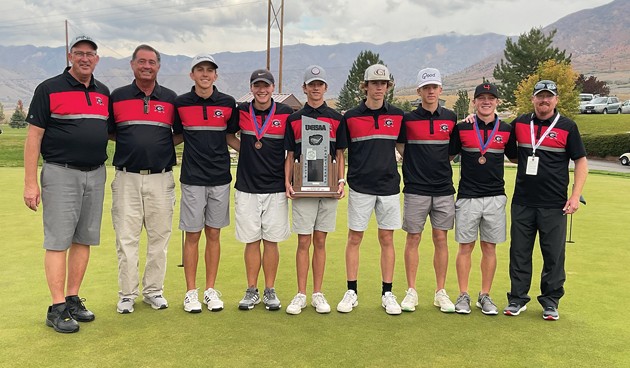 With the 2021 season in the books, the Grantsville golf team already is looking forward to 2022.

Grantsville finished second at the 3A State Golf Championships Thursday on their home course at Oquirrh Hills in Tooele. The Cowboys finished the two-day event nine strokes behind Morgan, who won the boys state golf title for the fourth-straight year.

The Trojans shot a two-round total of 602 compared to the Cowboys’ 611. Richfield finished third at 624 with Juab fourth and Union fifth.

“Second place was good, but they wanted to win it all,” said Grantsville coach Rick Harrison. “After they finished up Thursday they were back out on the range practicing the same day.”

Grantsville’s Chris Hansen and Ben Daybell finished in the top 10 of the 71 individual competitors who played two rounds. Hansen fired a 74 on Wednesday and 78 Thursday to finish at 152 tied for eighth-place, while Daybell shot a 1-under par 71 the first day and then 82 the second day to finish 10th.

“Chris was our one senior and he had his best back-to-back two days of golf. He played really well. He wanted to put it all together and finish strong his senior year,” the coach said.

“We were having a good first round and were up one stroke after 13 holes, but we had a rough two days on the par 5’s 14th and 17th. Morgan shot 7-under on those holes and we shot 4-over,” the coach said.

Morgan senior Tanner Telford won the individual state title with a sizzling 8-under-par 64 the first day and an even par round the second day to finish at 8-under 136. Telford has won medalist honors twice in the past three years.

Carbon’s Bode Salas finished at 144, Union’s Tytan Birchell and Ogden’s Coltin Powell tied for third at 146, and Hugo Padilla of Layton Christian Academy shot 147 to round out the top five.

Grantsville’s golf program continues to improve incrementally over the past five seasons. The Cowboys finished fifth at state last year.

“We’re still trying to learn how to be one of the top teams in the state,” Harrison said. “I have to give a lot of credit to the players who have played the past few years. When we started, if we had a couple of guys in the 80’s that was great. After three years we had our first guy shoot in the 70’s. Now we’re frustrated if we don’t have four guys in the 70’s.”

The Grantsville boys golf team was named the 3A All-Academic team for the second straight year with an average GPA of 3.95.