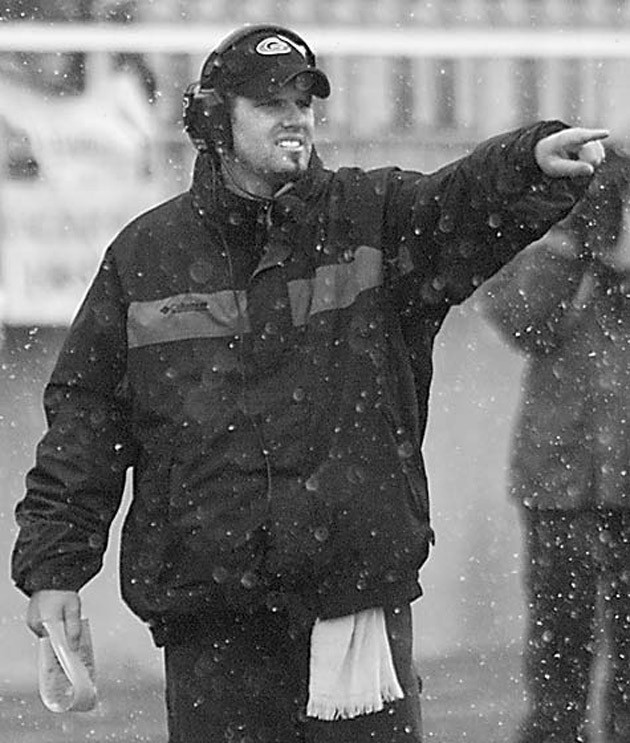 After a few weeks of searching for a head football coach, Grantsville High School Principal Leon Jones says the Cowboys have their man.

Principal Jones announced at the Cowboy Club banquet Monday night, and in a school newsletter Tuesday, that Anhder was accepting the position. However, after telling Principal Jones about a few reservations Tuesday morning and taking another day to ponder the move from Smithfield to Grantsville, Anhder finally accepted the vacant position officially Wednesday night.

Principal Jones said the selection process included a committe of nine local students, parents, and school employees that conducted interviews on eight candidates. He said there were 14 applicantes but the field was narrowed to eight for the committee’s interviews. “We felt like we had such quality applicants by the time it was narrowed down to four that we had an outstanding quality in the final decision,” noted Principal Jones. “There were a lot of considerations on teaching certifications and what is the best fit for the school.

Anhder was a resident of Logan.

“I made the final selection with the consultation of the commmitee and an extensive background research,” Jones added. “He seems to have tremendous skiill in dealing with young men and people in general and the ability to movtiate kids to new heights. We see him as being a tremendous addition to the school and his family will be a great addition to the community. There is no question in my mind that Craig will make a difference for our students, our school and the community.

I’m excited and look forward to working with him.”

Anhder played at Mountain Crest High during his prep days and competed in the state championship game as a senior. He served an LDS mission in Italy, Catania from 1993-95. Upon his return home, he played for Snow College, a team ranked in the top 10 in the nation.

Anhder graduated from USU in marketing education, business education and Italian. He coached with and played for Mountain Crest Coach Dan Cox and has been an assistant coach at Sky View High for the past five seasons. He married Mindy Liechty in 1995 and they have four children: Hannah (7), Conrad (4), Talia (2) and Stella (1 month).

“I enjoy coaching because of the opportunity to work with the boys,” Anhder said. “It’s one of the greatest things in the world to see the boys achieve success, to see them grow up and develop the qualities they need to be succesful in life. Grantsville is one of the best schools in the state. I can’t wait to be a part of the community and associate with the people. Already my family and I feel welcomed.”

Anhder’s daughter Hannah said “I can’t wait to be a Cowboy.”

“I hope to instill principles that will help these boys and students be successful in life,” Jones added. “Hard work and a positive attitude go a long ways — oh, and winning football games too!”

Hamilton leaves Grantsville High after two years at the school. The Cowboys took the field under his first campaign with 17 returning starters and still finished just 9-5 overall and third place in the Region 11 ranks. Grantsville used its veteran leadership to roll off three state road victories over North Sanpete, Park City and Morgan before falling 37-7 to Bear River in the state finals.

In spite of having one of the top quarterbacks in the state and best running back in the 3A, according to Coach Hamilton, the Cowboys finished a disappointing 5-6 overall and a first round state tourney exit in a loss at Wasatch.