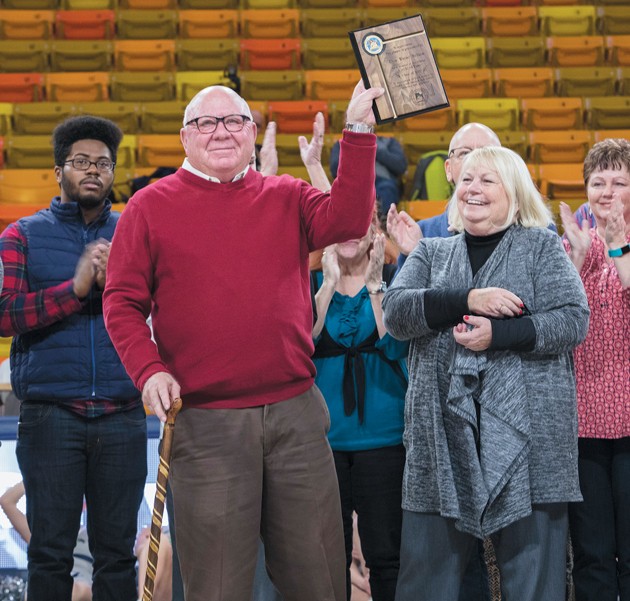 Don Wayne Nelson holds up the plaque he received when he was awarded the Circle of Fame by the Utah High School Activities Association during halftime of the Class 3A championship game at Utah State University in Logan on Saturday.

Don Wayne Nelson has been around high school sports for a long time.

The tennis-coaching legend was inducted into the Utah High School Activities Association’s Circle of Fame during halftime of the Class 3A boys basketball championship game on Saturday at Utah State University’s Dee Glen Smith Spectrum on Saturday. It is the most prestigious award given by the UHSAA.

“It’s an honor that I never thought I would receive,” Nelson said. “I’m very humbled by it, but appreciative of it. It just is a part of showing what it can be to be involved in high school activities and athletics for a long period of time. It’s just been a joy for me to serve Grantsville High School.”

In an address read over the public address sound system in the arena, Nelson was described as a man who loved high school so much during his time as a teenager he decided to go back.

Nelson has coached football, basketball and tennis for the Cowboys. He was the head tennis coach for 22 years, leading the boys and girls for a combined 50 seasons. His tennis teams won 39 region titles and 31 state championships.

Nelson is the PA announcer for GHS sports and is known as the voice of the Cowboys.

“As I was standing out there with him and obviously knowing about his career,” Bishop said, “it’s really mind-boggling because someone like that can have an impact on so many thousands of young men and women.”