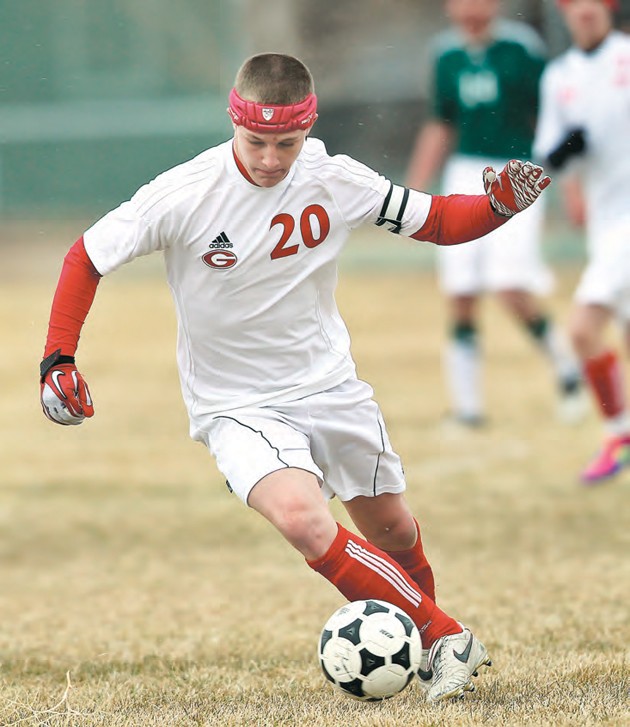 Grantsville senior Sam Williamson pushes the ball downfield in a match against Oakley on March 6. Williamson scored all three of Grantsville’s goals in a victory over Morgan on Friday.

It had been over four years since the last time the Grantsville boys soccer team could claim a region victory and at halftime Friday afternoon, their chances didn’t look promising as they trailed Morgan 2-1 after 40 minutes.

The Cowboys trailed by a goal until the final 12 minutes of the game, as Sam Williamson stepped up for Grantsville to help them find the back of the net. Williamson scored the game-tying goal in the 68th minute and buried a penalty kick in the 80th minute to give Grantsville a 3-2 victory in Grantsville. The last region victory before Friday for Grantsville came on Apr. 1, 2008.

“I think we just played with a lot of confidence finally,” said Grantsville coach Travis Lowry. “I think we are starting to realize that we are good enough to play with anyone in the league.”

Williamson was a big reason that Grantsville was in position to win the game as he scored all three goals for the Cowboys and brought the victory to his team. Kaden Fonger did log an assist in the victory also.

Not only did Williamson score all three goals with the hat trick but due to some injuries on the team, he had to move back more on defense, instead of his regular midfield position.

In the 13th minute, Williamson started off the scoring as Grantsville was awarded a free kick just outside the box. Williamson buried the shot into the frame to give Grantsville a 1-0 lead early.

Morgan fired right back with two goals before halftime to take a one-goal advantage into the break.

Grantsville kept it within one goal until the 68th minute when Fonger placed a through ball and Williamson was able to catch up with it and get it past the Morgan keeper to knot the game at 2-2.

The Cowboys weren’t satisfied with a tie as Williamson again was causing problems in the Morgan box and in the 80th minute was fouled inside the box. With a penalty kick to essentially win the game, Williamson showed little nerves as he ripped it into the goal to go ahead 3-2. Grantsville held on during the extra time for the first Region 11 victory of the year.

“The players were definitely excited for the win and they showed their gratitude to their fans who have shown such great support,” Lowry said. “Along with the play of Sam (Williamson) and Kaden (Fonger), I thought Ephraim Tripp played his best game of the season for us.”

Grantsville will have another home game on Friday when they host Bear River at 3:30 p.m.