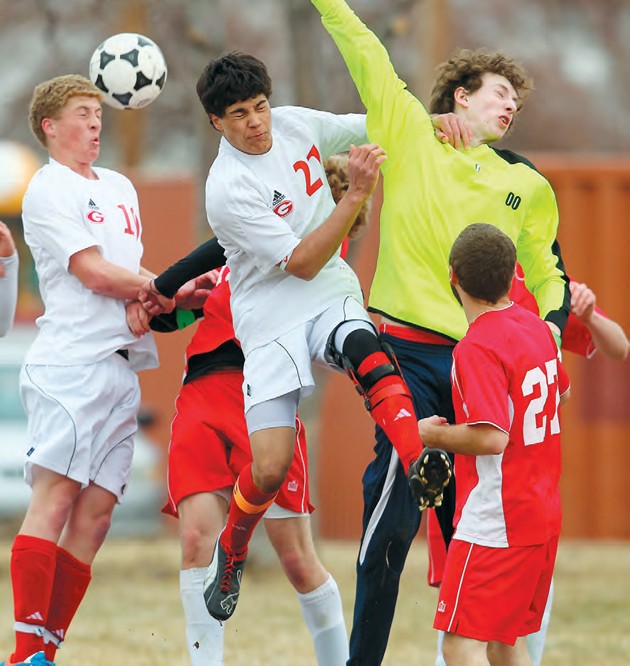 Grantsville High School’s Benton Tripp and Joe Lopez attempt to head the ball from a corner kick Thursday against Legacy Preparatory. The Cowboys won their second game of the season Thursday 4-3 over the Lions.

Grantsville will get a severe test when it faces 3A soccer power Ogden at Ogden today.

The Cowboys, however, are coming off a pair of preseason victories with a 3-0 win over Carbon and a 4-3 triumph over Legacy Prep on Thursday on the Cowboys’ turf.

One of two Grantsville victories last season was over Legacy Prep, but this year’s game was much closer. Last year Grantsville won by a score of 6-2.

“Legacy Prep is much improved from when we played them last year. They played us tough today. When they got back into the game today I think our team last year would have folded, but not this team. We’re a tougher squad this year too,” said Grantsville coach Travis Lowry.

At first it looked like the Cowboys would roll again over Legacy Prep this year with early first-half goals from Colton Barney and Benton Tripp. The visitors battled back to even the score at 2-2 at intermission.

“The end of the first half was pretty poor for us,” Lowry said. “Fortunately, we picked it up in the second half.”

The Cowboys pulled ahead on another goal from Barney, and Grantsville scored a fourth goal when the ball ricocheted off a Legacy Prep player into the net for a GHS goal.

Grantsville was helped out by the solid defensive play of Pierse Knapp and Ethen Steinfeld and the goaltending of freshman keeper Parker May.

A Legacy Prep player had a breakaway shot at the Grantsville net late in the game with a chance to tie, but May came out to thwart the attack with a fantastic save.