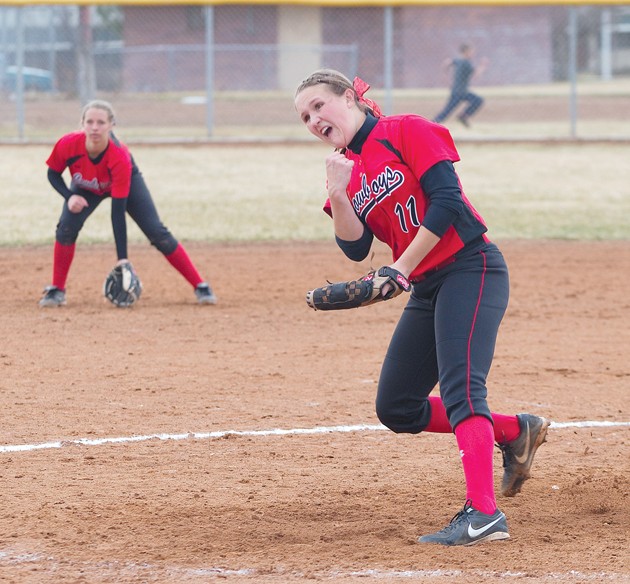 Grantsville and Juan Diego played in a back-and-forth softball shootout Friday in Draper, and it ended with the Cowboys getting the win.

Grantsville scored nine runs in the final two innings to pull away for a 14-8 win against the Soaring Eagle.

Most of the Cowboys’ offense came in the top of the sixth inning with the game tied at 5, and it started with a bloop single to center field by Whitney Fields. Autumn Dzierzon then stepped in and delivered a double to right field off the fence that sent Fields over to third. With two runners on and nobody out, Kolbi Jo Meno kept the string of hits going.

Meno blasted a base hit to right field to score Fields, and she then advanced to second base on the throw back to the infield. Grantsville had a 6-5 lead, and the inning kept rolling along.

Sydney Barney reached base on a pop-up that was dropped by Juan Diego; Dzierzon scored on the play to make it 7-5. With still nobody out, Bailey Critchlow walked to load the bases.

Juan Diego picked up a force out at home to bring Angel Cloward to the plate. She put the ball in play, and another fly ball was dropped by the Soaring Eagle. Cloward reached second base and two runs scored to make it 9-5.

Megan Cafarelli then put the ball in play as well on a sacrifice hit to score Cloward. Finally, Courtney VanOrdon picked up the last RBI of the inning on a base hit to right field, making the score 11-5.

Despite all the offensive power that Grantsville showed Friday, Taylor said the team still needs to get defense figured out.

Not all defense was bad for the Cowboys. Alivia McCluskey made some highlight plays at second base. McCluskey’s first big play came in the bottom of the second inning. With one out, the Juan Diego batter knocked the ball just slightly right of second base, which required McCluskey to turn on the jets and chase it down. McCluskey reached with her glove back handed and scooped up the ball. She turned and fired to first base for the second out of the inning, keeping Juan Diego from starting any rallies.

McCluskey’s next big defensive play came in the third inning. On a screaming line drive hit toward right field, McCluskey reached and snagged the ball with her glove for the out, preventing the hitter from reaching base.

The Cowboys’ offensive highlight came in the top of the fifth inning. The game was tied at 3 with Barney standing on first base after beating a throw for an infield hit. Critchlow stepped up to the plate and fouled off low pitch after low pitch. Finally, she got one she liked and blasted the pitch over the right field fence for her third home run of the season. That gave Grantsville a 5-3 lead.

Grantsville’s first three runs all came in the third inning. The first run came on an RBI from Dzierzon. She put the ball in play to score Chelsea Davis, but then she was able to get on first as well after the ball was dropped by Juan Diego’s first baseman.

Following a passed ball, Grantsville had runners on second and third base for Meno. She delivered a hit up the middle to score Fields and make the score 2-0. With two outs and a Barney on second, Critchlow drove in the third run with an RBI double.

The final three runs all came in the seventh inning. Grantsville made the score 12-5 following confusion in the field by Juan Diego. That allowed Meno to score. Finally, Cloward knocked a base hit to right field to score two runs and make the score 14-5. Juan Diego managed to score three runs in the bottom of the seventh before the Cowboys finished off the win.

Grantsville next plays at home against Copper Hills. That game will take place simultaneously with the baseball game and boys soccer game so plan for parking accordingly.