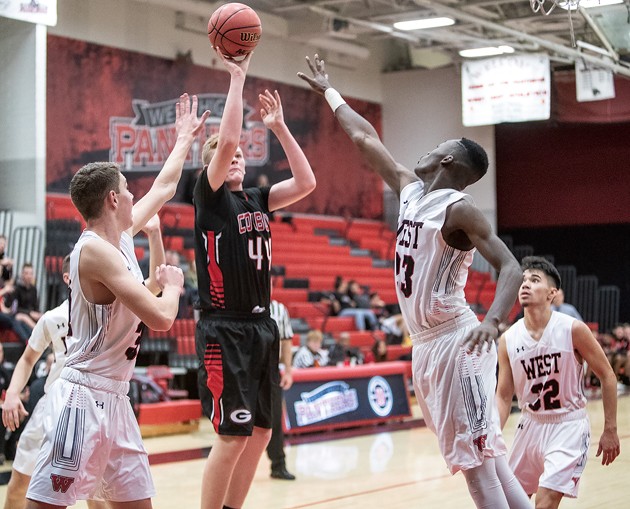 Grantsville’s Davin Ekins (44) elevates for a shot during Wednesday’s game against West in Salt Lake City. The Cowboys lost to the Panthers 51-38, having scored just eight points in the first half.

Grantsville didn’t have many positives to take away from the 51-38 loss at West on Wednesday.

The Cowboys missed 15 free throws, going 6-for-15 in the first half alone, and they scored once from the field during the entire first half, a layup by senior guard Izaiah Sanders with 23 seconds left in the first quarter.

Even with the dismal showing on the scoreboard, Grantsville only trailed by 10 at the end of the first quarter.

Cowboy head coach Bryan Detweiler said he didn’t have much to say at the end of the game.

“The underclassmen, I thought, did a better job of rebounding, and they had a real spark at the beginning of the third quarter,” Detweiler said. “I thought their effort was there.”

Senior guard Seth Beckett led the team in scoring with eight points. His two steals-turned-layups in the third quarter were the second and third Cowboy field goals of the night.

After being down by 15 at the half, Grantsville played the Panthers evenly in the third quarter, trailing 38-21 to start the fourth.