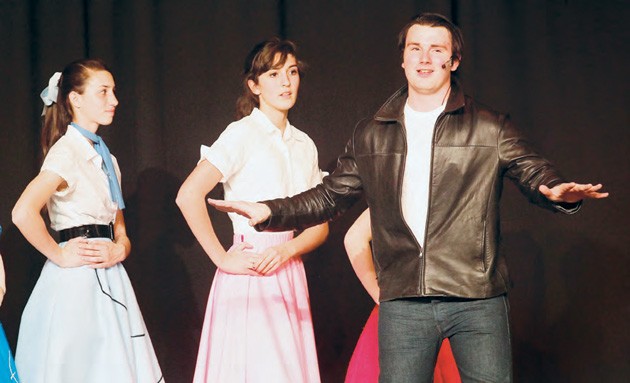 Dano Ogden, as Fonzie, rehearses a song from “Happy Days: A New Musical” with Jennifer Christensen and Normandy Wanberg singing backup Monday at Grantsville High School. The play will run Thursday through next Tuesday at GHS. It is the drama department’s biggest production of the year

Grantsville High School theater director Matt Price has called Grantsville his home since the age of 9, and he thinks his department’s upcoming play paints a picture of a community his fellow townspeople can relate to.

“Happy Days: A New Musical” is based on the iconic TV show of the same name that ran for 10 seasons beginning in 1974. It follows young Ronnie Cunningham and his family in ’50s Milwaukee, Wis., while they tackle everyday problems with the help of Fonzie, a lovable, street-smart biker and friend. The play itself focuses on the gang trying to save their beloved hang-out spot, Arnold’s Diner, from being demolished to make way for a shopping mall — a new invention in the ’50s. The play was developed in 2007 by Garry Marshall, the original creator of the series, and has toured throughout the country, although it has not yet premiered on Broadway.

Price said it is the first time the play has been staged by any high school in the valley, and he hasn’t found any record of it being performed by any school in the state either. It’s GHS’s biggest production of the year.

“This is our big show,” said Price. “It’s a musical — in fact, it’s a huge musical. There are usually about 12 or 15 musical numbers in a standard musical, and this one has 23.”

The cast is comprised of 36 students. Dano Ogden leads the cast in the iconic role of Arthur “The Fonz” Fonzarelli, with Stewart Nelson as Richie Cunningham, Sherroni Woodruff as Marion, Liam Donovan as Howard, and Shelby Randall as Joanie. Richard Jorgensen, Tanner Elsholz, Riley Ernst, Kenzie Martin, Tanner Hutchins, Katelin Christensen, Kylee Robinson and Kelsy Davis also have supporting roles. He believes the play is one younger audiences can relate to despite not growing up with the show as many in his generation did.

“It’s about the younger generation. It’s about high school students and growing up,” he said. “If nothing else, it’s about coming of age and about becoming an adult. So there’s definitely a lot for the younger people to get out of it.” Above all, he finds that the theme of community in the play is one Grantsville particularly will relate to.

“It’s all about their little corner of Milwaukee — their neighborhood and the people they know,” he said. “It’s about everybody doing what they can to solve an issue and to preserve what is their community. Arnold’s (Diner) is such a big part of their community that they really want to save it and hang on to the traditions and the things that the town has been. It reminds me so much of Grantsville because we’re the only community in Utah that still does the sociables and things like that.”

The show will feature a live orchestra providing the music. The safety of the orchestra pit in the GHS auditorium has been called into question after the school’s football coach, Tony Cloward, fell into the pit on March 9 sustaining serious injuries. Price says he relishes the opportunity for students to gain the experience of being in a live orchestra and believes filling the pit permanently would be a mistake. He supports the school district’s decision to look into removable covers for the pit.

“I am opposed to anyone getting hurt, especially in my auditorium,” said Price. “I want it to be as safe as it can, but I also don’t want the opportunity taken away from the kids. Being able to play in a live orchestra in a pit band is a huge opportunity for the community and for the students. Just like anything else we do at a high school, we’re preparing kids for things they might do in the future. To take that away completely would be, in my opinion, wrong.”

Price said he hasn’t had a cast member fall into the pit in 19 years of staging plays in the auditorium. The show runs from Thursday, April 26, through Tuesday, May 1, excluding Sunday, at the GHS auditorium with performances starting at 7 p.m. Tickets are $7 for adults, $6 for students and seniors, and $5 for children 11 and under.