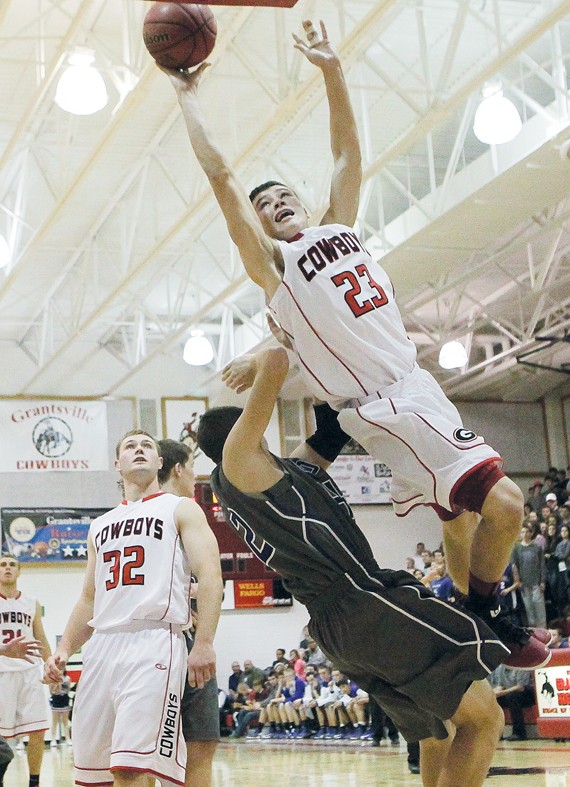 Tooele’s Justin Pollmann had just connected on a long 3-point shot as the third quarter ended to slice Grantsville’s lead to 43-42 entering the fourth quarter in Friday’s rivalry game.

“In the past that may have been cause for concern, but not with these kids,” said Grantsville coach Chris Baker. “They [Grantsville players] were talking to each other and encouraging each other at the end of the quarter and were ready to play tough defense and widen the gap in the fourth quarter.”

That’s exactly what the Cowboys did. Grantsville outscored Tooele 16-6 in the final stanza to cruise to a 59-48 victory. It was the second rivalry victory for Grantsville in a span of three days. The Cowboys defeated Stansbury 46-35 on Wednesday, Dec. 19.

Grantsville led 45-44 with just under six minutes left in the game when Devin Adams scored on a fastbreak followed by an inside basket by Skyler Cloward and two foul shots by Devon Arellano to expand the lead to 51-44 with 2:25 remaining.

Tooele called timeout and extended its defense to full court and was able to slice the lead back down to 51-47 with a basket and a pair of foul shots. The Cowboys were able to beat the press and got the ball to Cloward for an easy basket to make it 53-47. Grantsville sewed it up with another fastbreak basket from Adams with 50 seconds remaining to extend the lead to 55-48. Grantsville sank four more foul shots in the final seconds to make it 59-48.

The teams were pumped up to start this grudge match and the only basket the Buffaloes could manage in the opening 4 minutes was a 3-pointer by Shaydan Walker. Meanwhile, Adams and Arellano each scored baskets on solid assists and Cloward scored twice to make it 8-3 with 3:40 left in the first quarter. Tooele rallied behind the play of Tyler Woodruff who sank a 10-footer and then tipped in a shot to give Tooele a 9-8 lead with 1:40 left in the first quarter.

Woodruff led Tooele in scoring in the first quarter with 6 points and he continued his solid play throughout the game to score a game-high 20. Pollmann added 13 with two 3-pointers, Tyler Lawrence scored 9 with a 3-pointer, Walker scored 5 and Aaron Tippetts 1.

Adams got his game going in the third quarter with strong inside moves for 5 quick points. He opened the quarter with a basket then Lawrence connected for the Buffs from the corner for a 3-pointer. Then Adams worked in side for a basket and a foul to put G-ville up 33-27.

Adams repeated the move again later in the quarter for another old-fashioned 3-point play with a basket plus a foul shot to make it 40-32, and Grantsville pushed the lead to 43-34 with under 2 minutes left in the third quarter when G-ville’s Spencer Lawrence drained a 3-pointer from the corner.

Tooele stormed back scoring 8 consecutive points to end the third quarter. Woodruff connected from inside the key, then sank a foul shot. Pollmann made a great move by following a miss inside and then sank his long 3-pointer as the third quarter ended to make it 43-42 for the Cowboys.

“Having that leadership from Skyler really helped out. He was one of the guys on the bench motivating the rest of the players after three quarters. Skyler’s motor is constantly going — that’s why he’s able to get those offensive rebounds and score,” the coach said.