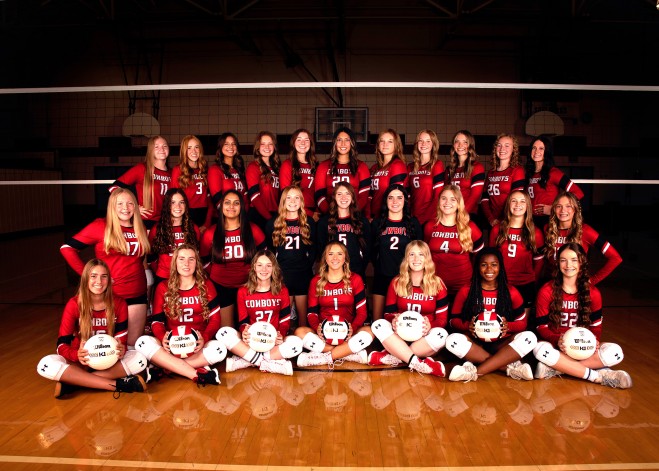 The Cowboys rebounded after their loss to Odgen Tuesday with a 3-0 win, 25-6, 25-9 and 25-12 over Ben Lomond at home Thursday.  Headed into the second half of the Region 13 play, Grantsville owns a  3-2 region record with wins over LCA, Ben Lomond and South Summit and 3-1 losses to Morgan and Ogden.  Tuesday they traveled to LCA, and they will host Morgan at home on Thursday as they work to move up from third place in the second half of the season and position themselves well for the state playoffs.  Thursday night against Morgan the Cowboys will also be raising money for cancer research at the Huntsman Center through a silent auction, Kash for Kills and Skills and honoring cancer warriors.  Games will be at 3:30, 5:00 and 6:30.

Against the Scots, Grantsville dominated the game with tough serving.  As a team they recorded 25 aces.  Kaitlyn Nordgren led all servers with eight while Avery Allred added six and Emily Ware five.  Sierra Nickell and Brooklyn Berrett topped the kills’ chart with five apiece, and Nordgren followed with three. Gen Moore and Ware each contributed two kills.  In the win, every member of the team saw playing time and contributed to the victory.

After their game, Coach Kelbey Fisher shared, ‘Each player did well with completing her role.  Girls really worked on their communication and energy between one another.  They have strong goals to work hard and compete in the second half of region.”