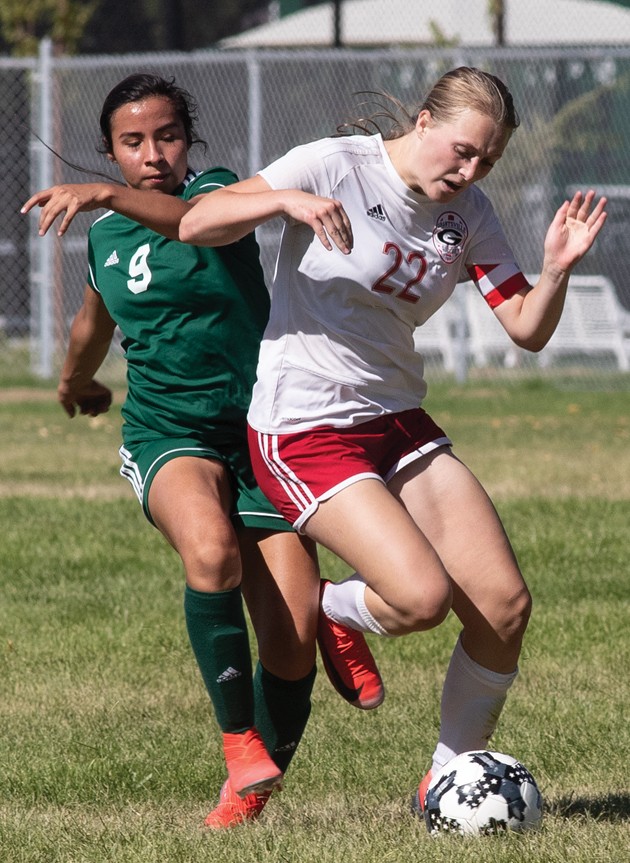 Grantsville junior Whitney Wangsgard (22) battles with Kearns’ Perla Pulido during an Aug. 20 game in Kearns. Wangsgard tied a Utah high school record with eight goals in the Cowboys’ 15-2 win over North Summit on Thursday. She has 112 goals in her career, which ranks fourth all-time.

Wangsgard also had three assists in Thursday’s victory for Grantsville (4-1). Freshman Sonya Scriven scored the first two goals of her high school career and McKenzie Allen had a goal and three assists.

Alyssa Roberts, Laura Sandberg, Autumn Barton and Elizabeth Whitworth each had a goal and an assist for Grantsville. Caprice Cortez and Kaylee Romney also had assists in the victory. Adalyn Enslen and Alexis Haynie split time in goal as 26 Grantsville players got playing time.

Grantsville traveled to Fillmore to face Millard in a non-region game that was not complete at press time Tuesday. The Cowboys will open Region 13 play at home Thursday against Providence Hall.