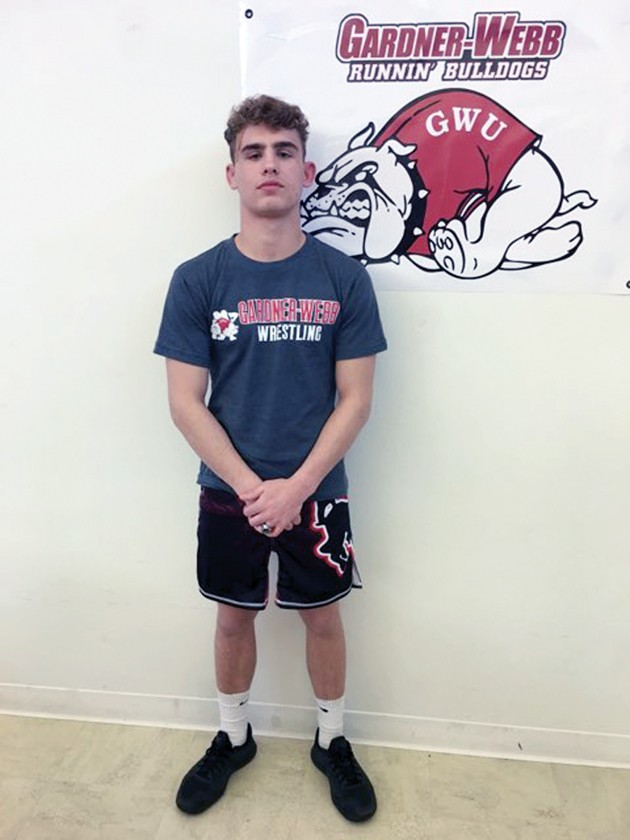 Grantsville senior Joseph Mecham signed a national Letter-of-Intent to wrestle at Gardner-Webb University in North Carolina on Wednesday. Mecham was the Class 4A state champion at 113 pounds as a junior wrestling at Tooele High School last season.

Local Tooele Valley wrestler Joseph Mecham, a senior at Grantsville High School, signed a national Letter-of-Intent on Wednesday to wrestle for Gardner-Webb University in Boiling Springs, North Carolina. The Runnin’ Bulldogs welcome Mecham as one of their top recruits of the 2020 class.

Gardner-Webb, a private Division I university with 4,300 students, competes in the Southern Conference for wrestling against teams from Campbell, Appalachian State, Chattanooga, The Citadel, Virginia Military Institute, Davidson and Presbyterian. Mecham will wrestle under coach Daniel Elliott, a Gardner-Webb alumnus who has led the program since April 2012.

“I’m excited to join the team at Gardner-Webb,” Mecham said. “I had a great visit to the campus this fall, and I really liked the coaches, other wrestlers and academic opportunities.  I look forward to wrestling Division I; it’s been a goal of mine for a while. I’m so thankful for everyone who has helped me so far in wrestling, school, and life.”

At Gardner-Webb, Mecham will also be a cadet in the ROTC program and intends to serve as an officer in the United States Army after graduation.

“Joseph is mentally strong and has really good technique,” Grantsville wrestling coach Clarence Evans said. “I’ve never seen him quit. His attitude will help him succeed at college as he takes his wrestling to the next level. As far as I know, he is only the second wrestler from Grantsville to sign at a Division I school. It was fun to be a part of his signing.”

“It’s exciting to see Joseph take his wrestling to the next level,” said Cody, Rich and Brett Valdez, who coached Mecham at Tooele High last season. “It’s fun to see kids follow their dreams and to have this opportunity  — plus it gives us another reason to spend time watching college wrestling.”

Mecham, who won a Class 4A state championship at 113 pounds last season at Tooele High under coach Cody Valdez, began wrestling with the Morgan Wrestling Club and coach Jade Woolsey in seventh grade. He spent his first two years of high school at Morgan under coach Dustin Rock, placing sixth in the Class 3A state tournament at 106 pounds as a freshman and taking second place as a sophomore in the same weight class.

In addition to high school wrestling, Mecham trains and competes in the offseason with Sanderson Wrestling Academy in Centerville under the coaching and direction of Cyler Sanderson.  Mecham has been working with Sanderson since the end of his freshman year and enjoys traveling with the club to tournaments throughout the country.