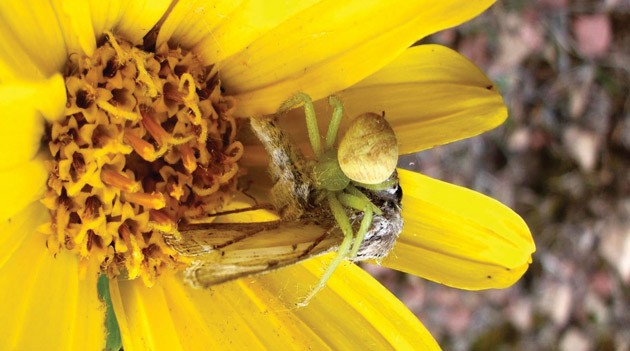 A female goldenrod crab spider devours her recent catch. She was located on a wild sunflower in Middle Canyon. She was not harmed during the taking of this photo.

The goldenrod crab spider was originally named after the sea creature it physically resembles. It also derives its name from a flower it uses for hunting.

The goldenrod crab spider is known for hiding on the stamen of flowers, possessing remarkable camouflaging capabilities. This technique is a unique color-changing transformation, because the spider is able to shift between the colors of yellow and white.

By color-matching daisies, sunflowers or goldenrods (solidago flowers), this peculiar spider conceals itself in these plants so it may hunt insects comparable to its own size. Devouring wasps, flies, moths, bees and butterflies, the goldenrod crab spider will sit patiently until its prey lands and is within its grasp. When a nectar or pollen-eating insect approaches the occupied flower, the unseen spider ambushes, bites, paralyzes, and fatally sucks the insect dry of its body fluids.

During mating season, male goldenrod crab spiders seeking a mate will search many flowers before they come across an awaiting female. Males tend to lose a few legs trying to escape birds, predators, and fighting off other males by the time they reach a mate.

When a female is found and after they mate, she then takes off to lay her eggs in a safer destination. She does so by cocooning and wrapping the young in a single leaf. Not ever leaving the eggs, the female goldenrod crab spider eventually dies of starvation from committedly standing guard over the unhatched spiders. A short while after the mother’s death, the young hatch and immediately leave their nest, off to fend for themselves.