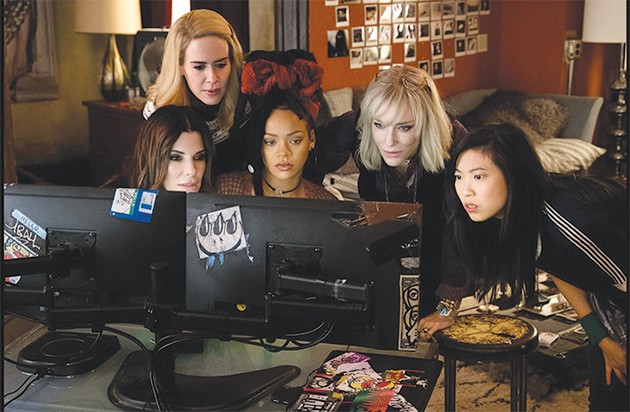 We have all been to a new movie and said, “I’ve seen this before.” Although “Ocean’s 8” just came out, I felt from the first frame that I was watching “Ocean’s 11,” only this time the characters were portrayed by women.

The story begins exactly as “Ocean’s 11” (minus George Clooney’s Danny Ocean) with Debbie Ocean (Sandra Bullock) having a parole interview. Unsurprisingly, she is released and contacts her old partner Lou (Cate Blanchett) to reveal a plan she came up with while in prison: to steal the Toussaint, a $150 million diamond necklace off the famous neck of Daphne Kluger (Anne Hathaway) during an upcoming Met Gala.

Debbie also sets up her ex-boyfriend Claude Becker (Richard Armitage) to be Daphne’s date to the gala in a revenge plan to pin the crime on him since he was the reason for her going to prison.

Rose Weil becomes Daphne’s dresser for the gala, and requests the Toussaint for her outfit. While examining the necklace at its high-level security vault, she scans it with special eyewear and sends a layout of it to a 3D-printer to make a copy. Meanwhile, 9 Ball hacks into the gala’s security system and creates a blind spot with the cameras next to the bathrooms. Other details of the plan begin to come forth with each person playing their respective roles.

Because of the necklace’s immense value, it needs to be watched by security guards every moment while it’s at the gala. Problems continue to arise when it’s discovered the necklace needs a special magnet to be unlocked. Will these problems be the women’s downfall as they try to avoid detection?

I had low expectations before watching this movie. There have been other remakes with the twist being the characters are now women (remember 2016’s “Ghostbusters”). After seeing the movie, I was surprised to find it entertaining, yet also unfulfilling. It’s a hard film to critique because there weren’t any blatant flaws, except for a few implausible moments (but what movie doesn’t have those?), and a number of things I felt I’d seen before. The plot was generic and it was easy to guess where the film was going.

It was a lot like “Ocean’s 11,” which isn’t a bad thing because I like that film. But I wanted to see something original. If I had known I was going to see a film trying to be like “Ocean’s 11,” I would’ve just watched that movie again instead. I think the filmmakers didn’t have the confidence to pull off an original film, which is a little sad because it is a movie led by women. For this reason I think it deserves its own originality.

This leads us to the one redeeming quality of the movie: the characters were good. The interactions between the leading women were hilarious, and I wish there had been more of them. Did such likeable characters save the film? Probably, because it is watchable.