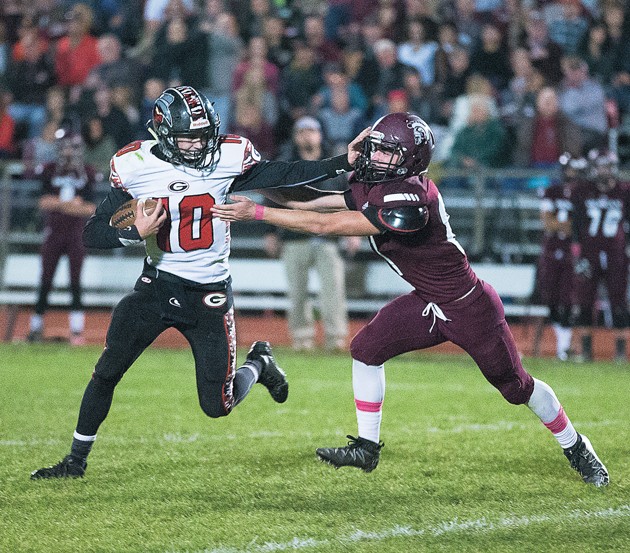 Grantsville quarterback Coy Johnson (10) gains some yards after breaking past Morgan’s Porter Giles (21) during the Morgan game at the end of the region season. (Francie Aufdemorte/TTB photo)

Following the 26-19 loss last week, Grantsville head coach Loren Anderson said he didn’t show any new plays since the Rabbits have had nine days to prepare for the first-round playoff game. But at the same time, he knows the Delta coaching staff didn’t give him anything new to think about, either.

“I don’t want to say it’s easier, but it’s almost like having two weeks to prepare,” he said.

As Anderson said last Wednesday, every time a team competes it does so with a winning goal in mind, though this week’s matchup is the only one that matters. The Cowboys sat out junior quarterback Coy Johnson as a precautionary measure, but he is expected to start Friday. Johnson’s favorite target this season has been senior receiver Gavin Eyre, who has three touchdowns on the season and has verbally committed to play football for Southern Utah University.

But Johnson likes to spread the ball around, too. Ten Cowboys have recorded a catch at some point this season, and Grantsville averages more than 80 yards per game through the air.

Senior running back Riley Smith provides balance to the offensive attack, averaging 70 yards per game and finding the end zone for a third of Grantsville’s rushing touchdowns. Smith has racked up 100 yards of rushing in three games this season.

Defensively, junior linebacker Brady Arbon leads the team with 52 tackles, 43 of which have been on his own, according to statistics found online. He also has one of the team’s two interceptions this season. Senior defensive end Jonah Bartley leads the team in sacks with three.

All those stats won’t matter if the Cowboys don’t find a way to improve over last Wednesday’s seven-point loss.

Eyre caught a 20 yard touchdown pass in that game. But the majority of the damage came from Arbon’s ability to run from the quarterback position, scoring twice with 116 yards.

Smith was kept mostly in check against the Rabbits, rushing for 49 yards on 11 touches.

“Riley is a big part of our run game,” Anderson said. “They may have won that battle last week, but we have it in our minds for this week.

“We need the ball in his hands probably 10 more times,” Anderson continued. “We’ve made some adjustments in our blocking scheme, so it goes back to preparation.”

It will be interesting to see how the Cowboys — and the Rabbits, for that matter — respond to having Grantsville’s primary gunslinger under center, and how Johnson and Arbon find ways to put yards on the stat sheet.

Kickoff was originally scheduled for 4 p.m. Friday, as was announced over the public address speakers at the Senior Night game, but has since been changed to 5 p.m. at Delta High School.