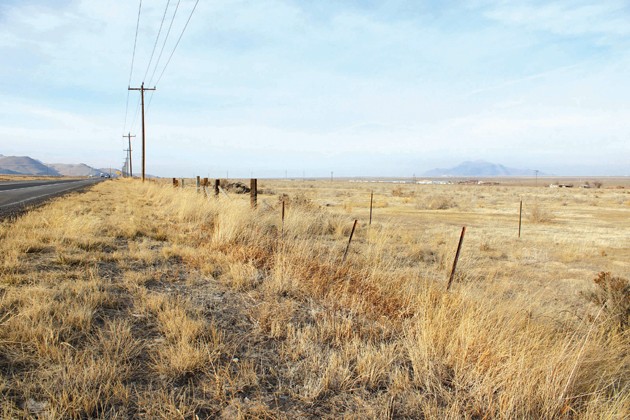 Commercial, residential and other types of development could happen in the near future on 155 acres east of Walmart Distribution Center. The land is situated between state Route 138 and Old Lincoln Highway.

The land will be zoned for mixed use (MU) and commercial development (CD). Previously it was zoned for agriculture, light manufacturing and mixed use. Mountain Vista Development and Monte Kingston requested the zone change.

Grantsville City Council approved the rezone Wednesday at its regular meeting following a recommendation for approval from the Grantsville City Planning & Zoning Commission. The Council also held a special work meeting to discuss the zone change.

Neighbors expressed concerns in emails to the Planning Commission. They are concerned with traffic issues, water pressure, possibilities of high-density housing, lack of infrastructure, increases in air pollution, noise pollution and light pollution.

“For now this is just a zone change,” the mayor said. “It is just the first step in a 1,000 step march.” In the future, developers would need to have all plans approved by city officials.

“We want to do what is best for Grantsville. This exactly fits our masterplan. We cannot stop growth, we can only control it,” she said.

“Grantsville is still a very rural area. Some people think we’ve lost touch and don’t care about Grantsville,” Rowberry said. He added that  nothing could be further from the truth. “We do care and we’re here to help,” he said.

Stice said the area would be a great place for commercial activity with the Walmart Distribution right next door.

The mayor said a truck stop would be a strong possibility for this area. Drivers would have a place to stop, eat and rest. Another restaurant option would also be good for Grantsville residents, he added.

Developer Derek Ellis said eating establishments, some small businesses and maybe a truck stop would reduce the amount of  idle time for drivers and the amount of truck traffic on the highway. And with access to I-80 drivers wouldn’t need to go through town.