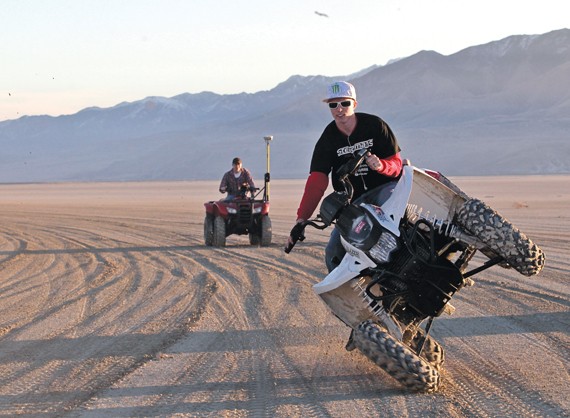 Danny Adams drives an ATV on a side-wheelie while Tooele County contract surveyor Taylor Hathcock follows him with milage equipment Tuesday afternoon on Stansbury Island while attempting to break a world record. Adams broke the world record by driving on two wheels for 17 miles.

At the end of the day Tuesday, as the sun fell behind the horizon and the light began to fade on Stansbury Island, Danny Adams stood covered with splatters of white, alkaline mud and celebrated his new world record.

Adams broke the record for driving a four-wheeled ATV farther on two wheels than ever before: 17.88 miles. The 21-year-old drove for an hour and a half in a side-wheelie, breaking the previous record by three miles.

“It feels pretty good,” he said. “I’ve been wanting this for a long time.”

Adams’ accomplishment is subject to verification by Guinness World Records, and he has to submit several forms of documentation, including video of the event, still photos and sworn statements from a member of the Tooele County Surveyor’s Department and a non-family witness. After the materials are submitted, Adams will have to wait six to eight weeks to hear whether his claim has been accepted.

The surveyor was present to officially document Adams’ mileage by GPS, and followed directly behind him on a four-wheeler. After Adams had gone a few miles on his first attempt, the run had to be restarted because the tracking equipment was not working correctly. Adams also had to start over one other time because during a turn he tipped back over to four wheels.

The Grantsville man said he learned how to drive on a side-wheelie about 10 years ago from his older brother, but did not set out to break this record until a few weeks ago, when he found a listing of it online. The record was set at Miller Motorsports Park in November 2008 by Travis Pastrana, of Maryland, who drove 13.85 miles around the track as part of an MTV show, “Nitro Circus.”

A fan of Pastrana, Adams decided he wanted to try to best the record and set himself a goal of going 15 miles. It would have been easier to drive the 15 miles in a straight line, but the asphalt of paved roads was too hard on the vehicle’s tires. Instead he thought the flats at Stansbury Island would be a good option, though the rains muddied the ground and made it difficult to ride on Sunday when he made his only test run. The earth did dry out enough for Adams to ride around a narrow sort of track of almost two miles in length on Tuesday to break the record.

Adams said his four-wheeler was in need of repair and was not reliable enough to be counted on to make the trip, so he contacted Steadman’s Recreation in Tooele and asked for sponsorship. Steadman’s leant him a Polaris Trailblazer 330 ATV to use, he said.

“They were really awesome,” Adams said. “’The ATV made a big difference.”

Adams’ mother, Julie, said her son has always been attracted to activities and stunts like jumping off of tall buildings or seeing how fast he could go on various forms of transport. When he mentioned trying to break this record, she said, she knew he would keep trying until he accomplished his goal.

Right up there with the happiness she had for her son’s accomplishment was the relief that he did it without being injured.

“I’m glad it’s over. I’m really thankful he didn’t tip over and get hurt,” she said. “But I really am proud of him.”

Wearing a helmet was not a requirement for this record, and Adams made the run without one. However, for his next goal, to break the speed record for driving a four-wheeler in a side-wheelie, he will have to wear protective gear. The current record is 47 miles per hour, also set by Travis Pastrana in November 2008 at Miller Motorsports Park. Adams said he will need the cooperation of either MMP or Rocky Mountain Raceway, because the documentation requires precise speeds that can only be adequately measured by an official raceway.