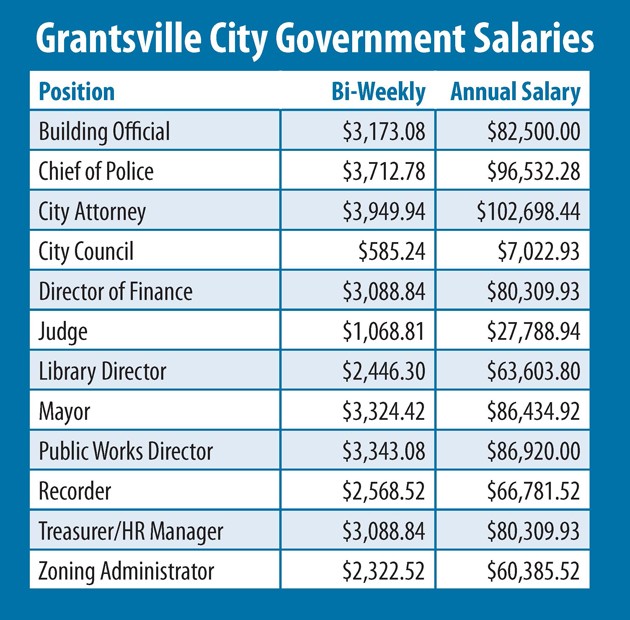 The Grantsville City Council approved a budget of about $9.7 million during its meeting Wednesday night at City Hall.

The budget includes a 3 percent cost-of-living increase for employees.

Councilman Scott Stice made a motion to approve establishing the compensation of elective, statutory and appointed officers of Grantsville City for the 2019-2020 fiscal year with no increase in City Council members’ stipend. Councilwoman Krista Sparks seconded the motion.

The City Council had discussed giving itself a pay raise that would not go into effect until Jan. 1, 2020.

However, the City Council voted 3-2 to eliminate the increase for the Council and approved increases for city employees.

Council members Stice, Sparks and Jeff Hutchins voted yes on the motion, while Jewel Allen and Neil Critchlow voted no.

Allen said she was in favor of an increase for City Council members.

“It’s not unreasonable to add a little more pay for council members to reflect all the work that a city council member can do in this position,” she said.

She said council members sacrifice time they could have spent with family because of their positions.

Stice said he’s OK with giving full-time city employees a pay raise according to cost of living and job performance, but said council members receive a stipend that is not based on cost of living.

City finance director Sherrie Broadbent said she believed the last time the stipend was increased for city council members was in 2012.

Grantsville will also receive $520,000 from the municipal energy sales tax and $120,000 from transit taxes.

Grantsville plans to spend about $2.18 million to operate the police department during the upcoming fiscal year.