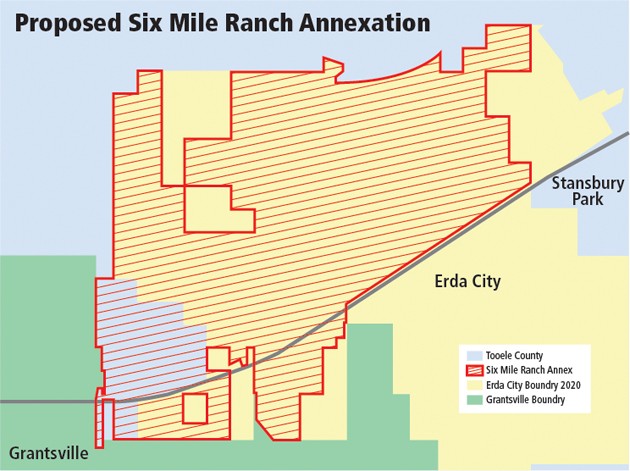 A recent court ruling opened the way for Grantsville City to annex a big chunk of land on the city’s northeast side and their City Council is set to consider that annexation at 7 p.m. on Wednesday night, Sept. 21, 2022 during their meeting at Grantsville City Hall.

The Grantsville City Council will take up a resolution to approve the annexation of approximately 7,889 acres known as the Six-Mile Ranch Annexation.

They will also consider the land use designation for the property and the designation of a special overlay zone for the annexed land.

The land proposed for annexation was in unincorporated Tooele County at the time the property owners filed an official “Intent to incorporate” notice with the city.

However, the property is within the boundaries of the voter-approved incorporation for the new city of Erda.

Erda residents voted for incorporation in November 2020. The City’s incorporation was certified by the Lt. Governor’s Office in January 2022.

The Grantsville City Council voted to accept an application for annexation from Six Mile Ranch for 8,934 acres it owns northeast of the intersection of state Routes 112 and 138 during the City Council’s Nov. 17 meeting.

Grantsville City Council voted to accept the annexation petition for consideration in December 2021.

After incorporating, Erda City filed a protest to the annexation that was heard by the Tooele County Boundary Review Commission. The Boundary Commission unanimously voted to allow Grantsville to proceed with the annexation process.

A group of around 22 Erda residents filed a request for a judicial review of the annexation with the 3rd District Court in Tooele.

In the request for judicial review, the attorney for the residents asserted that the annexation “would undoubtedly irreparably harm Erda, destroy the fruits of the incorporation process that Sponsors and incorporation supporters have worked so hard to achieve, and also directly irreparably harms Petitioners as landowners in the annexed area and as residents of Erda.”

Both the residents and Grantsville City filed motions for summary judgment.

The residents asked the judge to rule that Grantsville City’s acceptance and certification of the petition for annexation was without authority, contrary to law, in violation of petitioner’s constitutional rights and was void.

The residents wanted the judge to issue an order to stop Grantsville from taking any action which would result in the annexation of lands from Erda.

The Erda residents have filed for an appeal with the state Supreme Court.

The resolutions to be considered on Wednesday night by the Grantsville City Council designate the annexed property as zoned A-20 with an overlay zone that sets aside 2,500 acres of future industrial uses and 43 million square-feet of commercial space.

A proposed development agreement for the annexed property calls for 10% of the residential units to be set aside for moderate income households. A total of 25% of the land is to be set aside as open space with 10% being designated for public use as trails or parks.