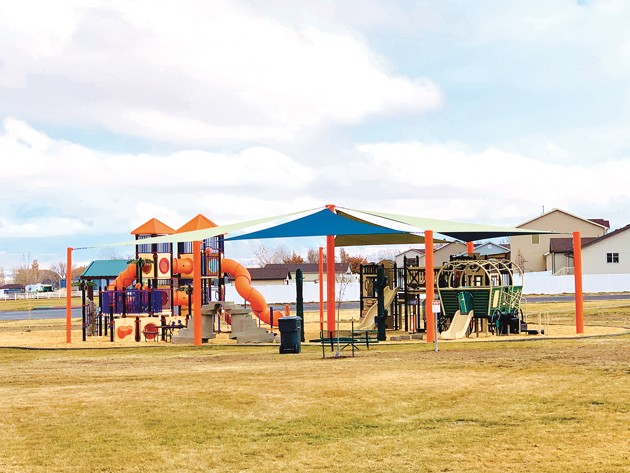 Grantsville City pumped $350,000 into park improvements this year in an effort to provide fun and safe recreation opportunities for children.

Improvements included Grantsville’s first dog park at Lincoln Park on West Clark Street. This month, workers finished the installation of a new $66,000 shade canopy at Hollywood Park in the south area of the city.

“We’re excited about the new shade canopy at Hollywood Park,” said James Waltz, city public works director. “Construction of the canopy began on Oct. 3 and it was quite complex.”

Waltz said columns for the canopy were set at a depth of 9 feet, 6 inches and encased in concrete and rebar to withstand high winds.

“What makes this shade project unique is that it is the first to be constructed in the Tooele Valley,” Waltz said. “The completion of this will certainly make summer play at the park much more comfortable on hot summer days. At Hollywood Park we have no refuge from the sun unlike Cherry Street Park where we have some big mature trees.”

With plenty of acreage available at Hollywood Park, the city plans to consider constructing a new Little League baseball/softball facility, according to Waltz.

The city installed a small dog park at Lincoln Park with help from Broken Arrow, Inc.

Restrooms were added at Lincoln Park at a cost of $50,000, and more improvements are in the works with an innovative swing set planned along with a shade canopy.

Grantsville installed new playground equipment at the toddler park near the Little League baseball field on Cherry Street this year.

Another major project included new playground equipment at Cherry Street Park with a soft, poured-in-place surface underneath to help protect children from falls.

Waltz said the city will look to upgrade Eastmoor Park near Main Street.

“We have some open spaces that we will try to focus on next year like at Eastmoor Park. There’s nothing there, it’s a blank canvas for us,” he said. “Our main goal is to provide quality recreation opportunities that provide a safe environment.”

When Waltz hired on as public works director about 14 months ago, he said he took a course and certified with the CSPC, Consumer Product Safety Commission. He also certified with the ASTM, American Society for Testing and Materials.

“When I started I did an audit on all our parks and determined we needed to make some changes,” he said. Waltz said the City had saved about $250,000 from park impact fees so money was available. Those fees are earmarked for new construction projects, he said.

“James was able to tell us where are parks did not meet safety standards and that has been extremely beneficial,” said Grantsville City Councilman Neil Critchlow.

“At the Cherry Street Park we had those wood chips under the equipment and the chips would always blow away,” Critchlow said. “We were able to install the poured-in-place surface. We would like to put that surface in and shade canopies at all our parks eventually.”

Critchlow said something needs to be done, such as some type of netting, to protect people from foul balls at the Cherry Street baseball and softball fields.

“It needs to be a cooperative effort with the City and the high school,” he said.

“We also need to build more Little League baseball parks,” Critchlow said. “We could also use another dog park — bigger than the one we have now.”