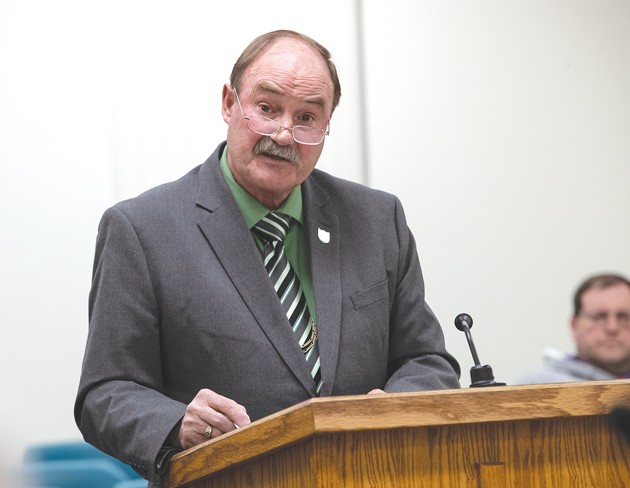 No vote yet on part-time mayor, full-time manager ♦

With ballots for a new mayor scheduled to be mailed next week, the Grantsville City Council continued their discussion on changing their city’s mayor to a part-time position during their business meeting on Wednesday night.

The agenda for the Oct. 6 meeting of the Grantsville City Council included the discussion of a proposed job description for a city manager.

The Grantsville City Council tabled a proposed ordinance during their June 2 meeting that would have amended the city code’s description of the mayor’s duties to state that mayor is employed by the city as a part-time employee.

The city council’s discussion at the June 2 meeting included a proposal to divide the mayor’s duties, creating a full-time hired city manager position and leaving the elected mayor as a part-time position.

The city council continued their discussion about the mayor and city manager positions during a work session meeting held on Aug.4.

The minutes of the Aug. 4 work session state that the city council agreed to hold a public hearing to find out how the public feels about the change. According to the minutes, the city council decided to consider the proposed change at their Sept. 1 meeting.

However, the agenda for  the Sept. 1 work session and regular business meeting do not mention a public hearing on the proposal or list the proposal as a discussion or action item.

The proposed job description prepared for the Oct. 6 meeting states that the city manager would work “under the policy guidance and direction of the governing body of Grantsville City.”

The job description describes the city manager as the city’s “chief administrative officer” who would manage “the day-to-day operations and internal affairs of the city; develops policies, procedures and processes as needed to implement the decisions of the governing body.”

The city manager would assume responsibility for city personnel, direct the preparation and administration of the city’s budget, coordinate city-wide management activities, advise the governing body on policy and administrative duties, and perform other administrative and executive functions, according to the job description.

Mayor Marshall asked specifically if the city manager would have power to waive fees and to sign ordinances, resolutions, and contracts on behalf of the city or represent the city at various meetings  — all duties of the mayor under the city’s current code.

Council member Jeff Hutchins said those details could be worked out by the city council during a work session before the change is formally adopted.

City Attorney Brett Coombs said the job description is just a starting point. Once the city council agrees on the duties of the city manager, then proposed changes to the city code would be prepared for discussion and approval by the city council.

Under Grantsville’s current form of government and city code, the legislative and executive powers of the city are exercised by the city council.

The city council has six members; five council members and the mayor.

The mayor serves as the chairperson of the city council and presides at meetings, but only votes in case of a tie and has no veto power.

The city council then delegates powers to the mayor through the city code.

In July, Grantsville Mayor Brent Marshall told the Transcript-Bulletin that he doesn’t favor changing to a city manager.

“A city manager is not accountable to the city or its residents, but only to five people,” he said. “And the city manager will also cost more money.”

Personally, Marshall said he is concerned that a city manager would come to Grantsville and only use the job as a stepping stone to something bigger and better, he said.

Grantsville isn’t big enough to need the expense of a city manager, according to Marshall.

“That would cost a lot less than a city manager,” Marshall said.

In 2020, as Grantsville’s full-time mayor, Marshall was paid $86,332 in wages, according to the state’s website Transparent Utah.

Marshall noted that both candidates for mayor, Scott Stice and Neil Critchlow, were present at Wednesday night’s city council meeting and are aware that the city council is considering a change in the duties and time requirements of the mayor position.

The council could make the decision to hire a city manager at any time according to city code, according to Marshall.

Marshall also said he would advise voters to vote for the best candidate for a full-time mayor.