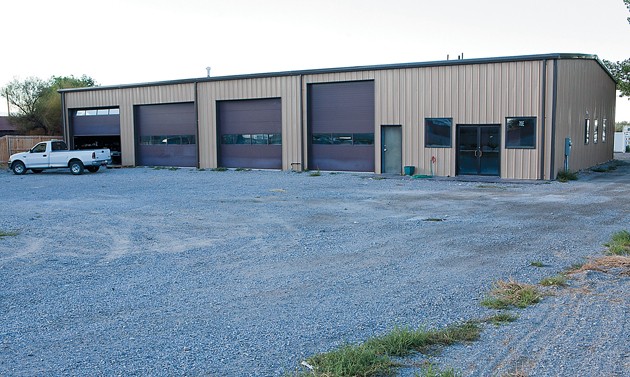 A garage belonging to Ken Grant at 713 E. Main Street in Grantsville was rezoned by the Grantsville City Council Wednesday despite earlier protests from neighbors.

A Grantsville man whose petition for a commercial rezone was met with hot protest from neighbors has had his request granted.

Ken Grant’s petition to take .72 acres of a 5.8-acre lot at 713 E. Main and have it changed from an RM-7 and A-10 zone — residential and agricultural — to a commercial neighborhood (CN) zone, was approved by the Grantsville City Council in a 3-2 vote Wednesday.

But, despite heated resistance from neighbors in earlier meetings, no citizen spoke in favor of or against the rezone in a public comment period at the start of the meeting.

In 2009, Grant requested a rezone to a general commercial (CG) zone for the 5.8-acre lot to relocate his business, Grant Automotive, from its current location at 6 E. Main Street. Residents spoke out against the proposal, citing a poor fit for an automotive repair shop in the neighborhood. Both the Grantsville Planning and Zoning Commission and Grantsville City Council ruled against the measure.

After the denied request, Grant constructed a garage for personal use on the lot.

In June, Grant again requested a rezone for much the same purpose, though only for a portion of the land and for a different zone. The CN zone carries with it more restrictions regarding hours of operation, noise and light than a CG zone. Neighbors and supporters packed both the planning and zoning meeting on June 12 and city council meeting on July 3.

The majority of residents’ concerns included lights and noise, traffic and workplace debris. Supporters argued granting the rezone would curb problems because Grant would be required to keep certain hours, keep a level of cleanliness and manage noise and lights.

In light of the negative neighborhood response, the July 3 council meeting ended in a 4-1 vote — with Councilman Scott Stice dissenting — to table the issue to give Grant time to alter or withdraw his request and try to compromise with his neighbors about the issues brought up in the meeting.

While no neighbors spoke at Wednesday’s meeting, some councilmembers questioned whether the two-month table had achieved its goal.

“I don’t think anything’s changed, in my opinion, in the last two months. I don’t feel that we should change the zoning,” said Councilman Scott Stice, who lives two lots away from the lot in question and who spoke against Grant’s original rezone request in 2009. “It’s not harmonious to the surrounding area, as it says in the zoning guide.”

Councilman Tom Tripp, who also lives near the lot, said he too was concerned and frustrated with the situation. Grant’s construction of a commercial-grade garage after the denial of the first zone change request, troubled him, as well, he said.

“I’d really like to find middle ground here,” he said. “On the other hand, you know, we’ve got a building here that was built as a residential garage. That was to circumvent the nature of the commercial zone that wasn’t allowed there. I have something of a problem with that. I was hoping to find some sort of middle ground, but I’m not sure there’s any to find.”

Councilman Neil Critchlow, however, argued that approving a CN zone and the zoning restrictions that go along with it, was a sort of compromise between the CG zone Grant wanted and the objections of the neighbors.

“This is our middle ground,” he said.

Councilman Mike Critchlow agreed, and noted that Grant would have to apply for a conditional use permit in order to operate any business or change any use of the property — this request was only for the rezone — which would give the council an opportunity to weigh in on his future plans.

“The city council can weigh in to allow any future use,” he said. “Any use he does in this area, he’ll have to come in for a conditional use permit, and he will have to be required to have things up to commercial standards.”

Colson proposed the approval of the measure, with Critchlow seconding. Colson, Critchlow and Councilman Mike Johnson voted in favor of the zoning change. Stice and Tripp dissented.