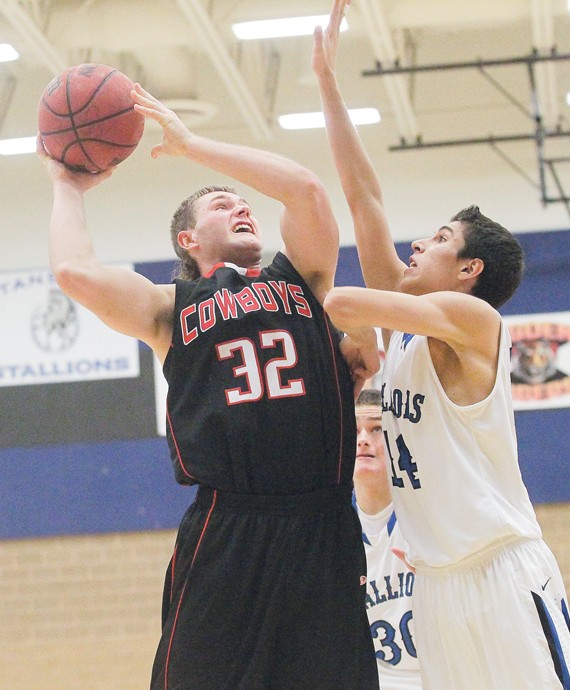 If there were any doubts about how good the Grantsville Cowboys were, those doubts were set aside in their suffocating 46-35 road win over the Stansbury Stallions on Wednesday.

Grantsville (5-3, 1-0 in Region 11) held Stansbury (3-5, 0-1 in Region 11) to 16 points in the first half, and senior forward Skyler Cloward hauled in just enough offensive rebounds for second-chance opportunities in the second half to power the Cowboys to victory.

“We’ve had a hard time beating those guys. We’ve lost a lot of close games (to Stansbury) the last couple years whether it’s football, baseball or basketball,” Grantsville coach Chris Baker said. “They’ve kind of had our number for a couple of years.”

Baker said the defensive prowess was the reason for the Cowboys’ victory against the Stallions on Wednesday.

“These kids — they fight,” he said. “We got our defensive swagger back tonight. I don’t think they score very many points in our half-court set. We fouled a little bit because we’re over-aggressive at times, but I’ll take that because we’ve just got to be aggressive.”

Even when Stansbury threatened to come back and take the lead with fastbreak points, Grantsville’s half-court defense held strong, allowing just 11 total points when the Stallions were forced to run an offensive set.

Stansbury shot 20-of-29 from the free-throw line, meaning just 15 points came from made field goals. Stansbury’s two fastbreak scores came on a Grantsville turnover and missed shot. Senior guard Ryan Robbins picked up a steal with 28 seconds remaining in the third quarter, and he put in a layup. He was fouled on the play and put in the free throw to cut Grantsville’s lead to 32-25. Then senior guard Niko Chacon grabbed a rebound at the 6:08 mark of the fourth quarter. He ran the break and found senior forward Stone Tia for a layup to cut Grantsville’s lead to 34-29.

“We struggled making layups … and missing foul shots,” Stansbury coach Ryan Harris said. “Grantsville’s a good team. They’re solid. We knew they would be coming in. They’re well coached, and they’ve got kids that play hard and work hard. They’ve got some skilled kids.”

Cloward grabbed just one rebound in the first half, but he came out in the second half to add eight more rebounds to that total. Some of those were offensive rebounds that he put back himself to contribute 10 points scoring. Junior guard Devin Adams led the team in scoring with 16 points, and he also grabbed eight rebounds.

Junior forward Spencer Lawrence got into the action early with scoring. Stansbury led 7-6 after a 3-pointer by Chacon with 1:21 left in the first quarter, and Lawrence answered that with a jump shot to put the Cowboys back on top 8-7. The Cowboys did not relinquish the lead for the remainder of the game after that made shot.

Lawrence added to his point total at the end of the second quarter. He nailed a 3-pointer with 2 seconds remaining to put Grantsville up 25-16. His teammates mobbed him as they were all heading to the locker room for halftime.

Baker said he was especially pleased with Edwards’ overall effort on the floor.

“I thought Caleb played his best game as our point guard today,” Baker said. “He was just really under control.”

Baker said although Arellano didn’t make a basket, being the team’s second-leading scorer, he was happy with the way Arellano contributed to the overall team defense to force Stansbury to miss so many shots.

He said he loved how the Grantsville student body got excited during the game to help take away the Stansbury home-court advantage.

“I love coaching these kids,” Baker said. “I love making great moments for them, and it’s a moment they’ll remember.”

Both teams have quick turnaround on Friday with more region games. Grantsville goes home to host Tooele (1-7, 0-1 in Region 11), and Stansbury goes on the road to visit Morgan (7-2, 1-0 in Region 11).

Baker said every coach dislikes playing region games in December, especially cross-town rivalry games. It just so happens that Grantsville has both scenarios in the same week.

“You know you’re not at your peak or where you want to be as a team,” he said. “The way the schedule works it’s emotionally hard for us. Going from Stansbury to Tooele right off the bat is tough for any school to do.”

Baker said he knows Tooele’s record doesn’t show them as being very successful, but he coached several of Tooele’s players when they were young children and knows how good they can be. He said it also takes time for a new coach to implement his system, as he recently had to do the same with Grantsville. He said he expects a tough game when the Cowboys host Shawn Faux’s Tooele Buffaloes.

For Stansbury, it’s all about remembering that this was the first region game, and there are still plenty of opportunities to bounce back and make a playoff run. Harris said he loves how his players continually work hard no matter the circumstances.

“The thing we try to tell the kids is focus on the video and not the snapshot,” Harris said. “We’re just trying to improve. We just need to continue to trust the process of improvement, regardless of the setbacks or frustrations. Our kids are good at that. I love these guys for that reason.”